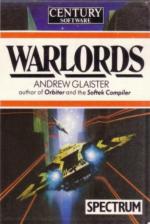 The inlay card states that the action in this game takes place on the planet Jupiter. If that is the case there are a lot of planets out there which look remarkably like Jupiter, or vice versa.

Your most unlikely mode of transport is a hybrid ostrich which is also supposed to be a fighting machine because of its claws. I found the claws superfluous because the aliens were easily subdued when the ostrich sat on them. Because the keyboard is divided in half, two players can compete, and the controls are simple, just left, right and fly.

Unfortunately, the response is not too positive when you want to go left or right. Sometime after the keypress the thing decides to move, and continues to move after your finger comes off the key. This could become disconcerting, should you hang around long enough to play the game. According to the inlay card I should find the game 'exciting to play, taxing my powers to the limit'. The only thing to be taxed was my patience. This same theme was tried many moons ago, and it wasn't even very successful then.

This same theme was tried many moons ago, and it wasn't even very successful then.