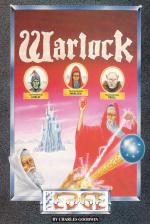 Why is the great Spectrum public always submitted to the endless torture of being good? Why can't they be baddies for once? What do you mean they can? Oh yes, that new game by the Edge, Warlock.

You play an evil Wizard who's castle of darkness has been attacked by those nasty forces of good. So, being the nasty type you are, you naturally go off into the deepest levels of this fortress of evil to wipe out the do-gooders. It's not bad enough that they've invaded your privacy, they've taken all your best phantoms, and would you credit it? - they've turned them against you.

Warlock is yet another filmation flip-screen arcade adventure. Basically you have to find your Orb of Power which, oddly enough, is missing. Mostly you are wildly outnumbered by bad (good) guys, you are helped by having a choice of characters. Now, by finding a cylindrical thingy, you can change from the Wizard, through a thug with a club, to something which I can't really distinguish.

For the most part, the graphics are well defined - The Edge's games never look clumsy - and quite recognisable but in some cases they are too detailed for their size and end up looking a mess. The layout of the screens in general is messy and cluttered and for a lot of the time it is difficult to move around as you can't be clear whether there's a block in front of you or not. In any event the controls are sluggish and unresponsive. Even turning around seems to be impossible in some cases. The game also slows down dramatically when there is a lot on screen, and by a lot I mean more than three characters. The game also has an annoying glitch that makes you walk through doors that you don't want to. Altogether, not a fabbo game. In fact, it's not a good game. It's fair, but I have seen better.

In the ideas department, a step up from most filmation games but sadly; nearly everywhere else it's found wanting.

In the ideas department, a step up from most filmation games but sadly; nearly everywhere else it's found wanting.