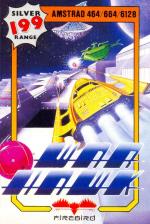 You are the pilot of Warhawk, a sophisticated spaceship out on a mission of destruction. Enemy bases are littered throughout an asteroid belt and your task is to obliterate them.

It's a vertically scrolling shoot-'em-up that looks and plays a lot like an earlier Firebird release, Mission Genocide. Almost all of the screen scrolls down towards you and below the main play area is your shield status and score. Your ship can move up and down the screen as well as to the left and right.

The game is split into levels, each level being a different asteroid. The asteroids scroll beneath your ship and aliens in various formations swoop down towards you. Meteor storms appear at times and these can't be shot, so you have to dodge out of their way. Collision with meteors and aliens damages your shields. If you run out of shield energy then the game ends.

On the title screen there's a nice little tune and during play there's a continuous one. The in-game effects are loud and zappy, just what you need for a shoot-'em-up. The vertical scrolling is smooth, but the movement of the aliens and your ship is jerky.

Very little thought needed as you blast your way through wave upon wave of aliens. There's little variety in alien formations, but you do get plenty to blast away at. One other thing, don't, believe the cassette inlay as to which key is pause, Esc aborts the game.

Warhawk is jolly enough for a budget title - undemanding blasting. It doesn't have much variety and it's difficult to stay alive for long. Everybody probably has one like this in their game collection - the trouble is most of them were bought two years ago.

Sometimes aliens merge with the background.

Grab Factor 58%
P. Pick up a joystick and fire away.
N. Once you've seen one scrolling shoot-'em-up you've seen 'em all.

Staying Power 42%
P. Hordes of aliens to blast.
N. Not much variation from wave to wave.

Overall 49%
N. Games like this are unoriginal and outdated, even if they are cheap.

The vertical scrolling is smooth, but the movement of the aliens and your ship is jerky.