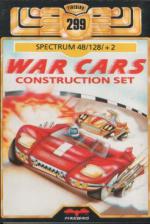 Not being particularly excited by 'real' slot car racing, I had to make a special effort in order to look at War Cars with an impartial eye. I really wish I hadn't bothered.

War Cars (originally titled Car Wars, then changed for reasons best known only to Firebird and the licencees of other games or films no doubt) has two elements. There's the race, where you and a drone car hammer (well, pootle really) around a circuit collecting flags for points and getting lost. The other bit is the Construction Set, where you can design your own racetrack. Just like Virgin's Scalextric really. It's all fairly harmless although immensely boring. There's nothing at all to retain the interest of anyone except the most avid slot-racing fan. Think of all the other things you could spend three quid on.