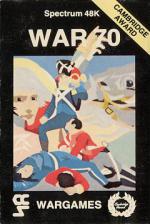 A two-player war game set in the mid-18th century. The aim is to capture your opponent's capital by occupying it for three days. For each day you have the option of regrouping any of your nine armies and you can move up to four groups of armies.

When opposing forces meet play switches to a map of the battlefield - each of the 32 locations has a different map.

Each player then sets the destination co-ordinates of each unit. If a unit is within close range of the enemy you may fire. The unit will return fire and casualties calculated. If two units meet hand-to-hand, fighting takes place.

Artillery can fire over a long distance, but it is difficult to judge angles and range. A unit is defeated when it is less than a third full strength or it has failed two morale tests, depending on casualties, officers and a random factor. When all of an army's units have been defeated the battle ends and play returns to the main map.

An interesting game that takes too long - and you must find an opponent.

An interesting game that takes too long - and you must find an opponent.