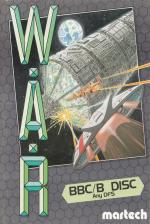 In a year that has already produced two excellent and classic shoot-'em-ups (Galaforce and Psycastria), BBC owners gain an extra treat with this superb space game. I'm not sure if this is a diret conversion from another machine but, even if it is, it is a gem!

A small vertical window holds a very smoothly scrolling vertical planet surface. Your ship can move in all four directions but, obviously, you must move deeper and deeper into the game and get past the surface to the enemy's installations. All the while, of course, you are being buzzed by wave after wave of aliens and having to dodge certain buildings on the surface. A bit like a cross between Uridium and Galaforce, I suppose.

The graphics are amongst the best I can recall for the machine, the sound effects involving and the gameplay compulsive. It is perhaps the nearest game so far on the Beeb that captures the style and excitement of playing in the arcades. Well done, programmer Michael Archer - more please!

Well done, too, to Martech who usually embarrass us with real turkeys like Sam Fox Strip Poker game. This has to be one of my nominations for BBC Game of The Year!

One of my nominations for BBC Game of The Year.