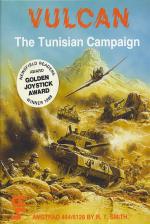 CCS has an excellent reputation for war games, with past successes like Arnhem and Desert Rats. The author of all three is RT Smith, who seems to produce better and better games. The campaign more or less follows on from Desert Rats. It revolves around the battle for Tunis and the eventual elimination of the Axis in North Africa.

If you've got Desert Rats, the presentation, controls and action of Vulcan will all be familiar to you. The game takes place on a large scrolling map of Tunisia, stretching from Tunis and Bizerta in the north to Mareth and Medenine in the south and Tebessa in the west. The terrain is often mountainous and criss-crossed by a network of roads. Both features play important roles in the control of your units.

As with past RT Smith games, the "front end" of the game is impressive. You can play with one or two players, the computer controlling Allied or Axis forces with equal skill. The game can be saved or options changed while in the middle of a game, like switching from two players to one against the computer. There are five scenarios that you can play; the shortest will take 25 to 45 minutes and the longest 8 to 16 hours.

The scenarios take you from the first clashes near Tunis in early November 1942 to the final battle. Operation Vulcan, in April and May 1943. Each scenario has different victory conditions relating to the capture of towns and airfields in that region of conflict. The option that covers the whole campaign is just a straight fight for control of Bizerta and Tunis - winner takes all.

The computer controls the appearance of units on the map. Once they're there you can give them a number of orders. Move allows you to do just that. Assault is the same but more aggressive. Hold instructs the unit to dig in. Travel allows rapid movement by road. Fortify digs the unit in more strongly. Report gives information on the strength, movement capability, supply, morale, attack modifier, efficiency and fortification of a unit.

Much of the strategy and tactics required can be gleaned from the excellent instruction booklet that includes historical notes on the campaign. Experience is the best guide, helped by the fact that getting into the action is surprisingly easy. Among the new features in the game are hidden movement and air attacks.

Hidden movement is optional for a two-player game but always exists against the computer. This adds a realistic edge as you can't be sure about the enemy's movements unless in contact with them or after reconnaissance by air. The air section is very simple, allowing attacks and recce but is a welcome addition.

The combat rules are detailed, all handled by the computer of course - you just have to decide the units orders. That requires plenty of thought and planning. Considerations of supply are most important to keep your units at their most effective: so are reinforcements, withdrawals, terrain and unit types. For a successful campaign you'll have to consider all of these when controlling units, although a more simplified approach can be taken if you don't have the patience.

I enjoy this type of game because it allows you to get straight into the action without any trouble at all, but can satisfy the need for depth, strategy and detail as you progress and tackle longer scenarios. The graphics are functional - a good scrolling map and clearly identified units.

This is the best yet from CCS and RT Smith. I'd like to see them move on from the Second World War and tackle other projects, maybe delving further into the past or even into the future.

Vulcan: The Tunisian Campaign is another high-quality strategy game. It has many options nicely presented, including some for short games that let you get the feel of things. It may be a little confusing to start with, but stick it out. It gives hours of battle which I, for one, thoroughly enjoyed.

Grab Factor 78%
P. Easy to get into, with short starter scenarios.
N. Maybe too many options, confusing the beginner.

Overall 82%
P. The best yet from CCS and RT Smith.

Depth, strategy, tactics and detail. The best yet from CCS and RT Smith.