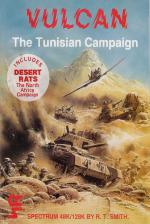 CCS has redeemed itself after Gallipoli, which was court-martialed for failing to reach the wargame specialist's usual high standards. No silly arcade sequences in this one. RT Smith, who's already brought us Arnhem and Desert Rats, has produced yet another good, solid simulation.

The Tunisian campaign of 1942/3, from the first dramatic dash to control Tunis by the Allies to the defeat of the Axis armies, presents some classic problems for the Spectrum commander. Many of these are concerned with terrain. Taking to the roads is the quickest way to travel, but leaves your forces vulnerable. If you choose a mountainous route, you can dig in when attacked, but the trek across Africa will take forever!

There's also the question of supply. If an enemy unit interrupts the lines between a unit and its HQ, it will quickly run out of equipment, and soon after, strength! As all units exert a zone of control, through which a line of supply cannot be traced, you have to guard your rear while trying to cut off the Nazis.

The other major landscape-related problem is that in this rough terrain, it's difficult to identify enemy units. In fact, unless you choose otherwise, you won't see any Axis forces until they're right next to you! The only way to avoid this sort of shock is to use your airpower wisely. If you don't actually need them for an attack, sending planes up will give you a reconnaissance report. That way you can be prepared for the ambush that lies ahead.

The control system is elegant, but with one or two minor loose ends. Units are commanded via a cursor and menu, moving over a large, scrolling map. The rough edges appear where some menu prompts aren't quite as helpful as they could be, but a proper reading of the 32 page rule booklet first should answer any problems.

There are the usual one or two player options, plus a save game feature, and the chance to turn a two player battle into a solo venture, with the computer taking either side. This is particularly useful as the estimated playing time for the whole campaign is eight to 16 hours! Don't worry though - there are mini-scenarios which can be played in under an hour and still provide a stiff challenge.

In addition, 128 owners get an expanded Vulcan on side two, which includes an optional debriefing report at the end of each turn. This is a useful way of keeping up with how successful your strategies have been. You also have the chance to indulge in the military historian's favourite pastime - what if... What if the Axis had controlled Malta, for example? This is a chance to put those imponderables to the test.

Vulcan is probably not a program for wargame novices, but anybody who enjoys tough tactical problems should find it something to get their teeth into

Probably not a program for wargame novices, but anybody who enjoys tough tactical problems should find it something to get their teeth into.