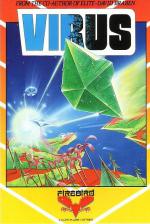 Aaaaaaaaaaaaaaaaagh! 3-D GONE MAD! My brain can't cope! Virus may well be the best game this month, but it's so difficult to play it makes my head hurt.

Anyone who has stuck together the pages of Commodore magazines with dribble upon seeing screenshots of the Amiga version should be damned impressed by this. As well as being a fantastic conversion of the game, it does things never before seen on the Spectrum.

Virus began about eight months ago on the Archimedes machine. It used to be called Zarch and it was packed so full of fab 3-D graphics that no-one even dared a Speccy conversion.

Well now it's here and it's truly brilliant. The game shows your craft, in the middle of the screen and the world moves in true three-dimensional perspective around it. It's like having a helicopter following you around, beaming what it sees on to the TV. As a result, you've got a ship that can literally fly in EVERY direction, and you've got a much more precise view. In games where you view things through the cockpit it's impossible to tell how close you are to objects. Here you can actually see it.

The controls take ages to get used to. You can rotate on a vertical axis and pitch forwards through 180' from ahead and upright to backwards and upside down (like half a loop-the-loop on-the-spot). You propel yourself with a thrust stream that comes out of the underside of your craft. So in order to get anywhere, you've got to pitch yourself forward and thrust. Fine. Did I mention the gravity and inertia that pull you down and prevent you from stopping? No? Well, they make things just a tiny bit more difficult. So until you've crashed into the ground 200 times, there really isn't any point in trying to get to grips with the game as such. Eventually though, you'll get the hang of flying in straight lines and you'll decide that it's time to kill something.

There are plenty of possible targets. The storyline (mercifully brief) is that aliens are invading and spreading their horrible redness all over the place like so much chicken-pox. You've got to put a stop to it.

A map can be called on to the screen so you can see just how far the infection has spread. There's a radar scanner in the top left hand corner of the picture so you can track the bad guys, as well as keeping an eye of your home base in case you need to re-fuel.

There's a fair number of bad guys in the game. It gets progressively more difficult, starting off with one alien craft spreading the Virus. Once you've dealt with him, you go to level two with more aliens, the level three and so on until the whole world is full to the brim with the little beggars.

The speed that the author has managed to achieve is very impressive. The ground scrolls beneath you and rises and falls. It's a bit like Digital Integration's ATF, but much more advanced.

Although it's always remarkably unproductive, you can spend a few highly interesting moments just zooming around at ridiculous speeds and then crashing into hills.

Virus is by no means a verbatim copy of the Archimedes game, or of the ST on for that matter. It is easily the best combination of 3-D graphics innovation and straightforward, high-tension combat. The strategy element isn't enough to bog you down, but it's vital that you pay attention to the map if you're going to get anywhere in the long run.

There's no question. It's definitely well worth buying.