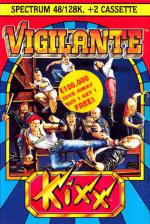 This one looks suspiciously like a sideways scrolling beat-'em-up to me, a bit like Kung-Fu Master (if you remember that). Y'know, one where the idea is to make your way from one side of the scrolling playing area to the other, kicking and punching baddies until they die. There aren't too many beat-'em-ups like this around, as most also allow you to move back into and out of the screen as well (hello, Target Renegade), and, to tell you the truth, these sort are a lot more fun anyway 'cos you can pick which baddies you want to fight with, as well as how and when. But since you can only move left and right here, things are predictably far more boring. Very little skill is actually needed either - it doesn't really matter which move you use (of which there aren't many anyway), and you don't have to have any real sense of timing, except to avoid the bloke who shoots at you (and is almost always the cause of your death). There's an end-of-level baddie too, but I found that if I'd remembered to pick up the weapon during the level - one of those toilet chain things or whatever they're called [Nunchukas. - Ed] on Level 1 - it's no problem to finish him off.

The graphics are generally crap, including dreadful colour clash (although you can play in mono) and bad scrolling, and there's an annoying wait every time you start a go. But the greatest problem has to be the lack of challenge, because you don't have to have much skill or practice to get anywhere (as long as you watch out for the bloke with the gun). There're loads of levels (multiload, tape-recorder fans), but all that means is different backdrops, different looking baddies but similar gameplay all the way through. It's certainly not up to Target Renegade's standards, and as that's also available on budget, I'd recommend either buying that, or giving your money to me.

There are loads of levels but all that means is different backdrops and different looking baddies. The gameplay is similar all the way through.