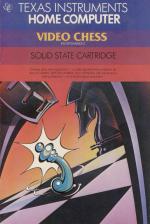 This cartridge gives as much as could be reasonably expected from a computer chess program. Unfortunately, it is rather overpriced compared to other chess programs available for other computers.

The instructions first give an explanation of the game of chess itself and the notation used to describe your moves to the computer.

The manual then goes on to explain the various options available to the user.

These are all menu-driven. The first menu has six options: play game, which starts the play; selection of game type, which gives you three other menus - level of play, style of play, or colour; chess board, which enables two human players to play; set up a problem, this means you can set up the board in any position and to play the computer from there; play more than one game simultaneously, up to nine games can be played; and to load in a game from cassette tape.

When playing a game you can cancel the last move, resign, offer a draw to the computer, replay from start, change sides, rearrange the pieces, change the style of play, correct the last move, and save the current status on cassette tape.

Castleing, pawn promotion and en passant are all supported.

Castleing, pawn promotion and en passant are all supported.