ZX-Guaranteed's first foray into the Spectrum market is Venture, a program made up from seven separate games rolled into one. You start with £1,000 and at each stage you may either win some money or lose half of what you have. The first game is Duckrace, in which three ducks move randomly across the screen, and you have to back one to arrive first. About as sophisticated as a boiled duck's egg, and the second part, Las Vegas, is much the same. You are given ten goes on a one-armed bandit - pressing S stops the reels, but there is no hold feature. I can hardly think of a better application for user-defined graphics than a fruit machine, but unfortunately the program uses flickering numbers instead.

The third part is Treasure Hunt in which you have to guess the position of the treasure on an 8 x 8 grid. The game is made very easy by the clues given (e.g. "down and right") so it's not much of a challenge. The next game is Mastercode - again numbers-based and a completely routine Mastermind.

The fifth game, Track, is an obvious conversion from the ZX81 - 5 and 8 steer a racing car on an upward-scrolling road. Leopards don't change their spots, and a flickery ZX81 game remains just that, even if it is put onto the Spectrum. In the sixth part, Bomber, you have to bomb a ZX81 before your plane crashes into it. This strikes me as being a rather ungrateful way to treat the machine on which all these programs were originally written!

Hmmm, bomb a ZX81 before your plane crashes into it. Rather an ungrateful way to treat the machine on which all these programs were originally written! 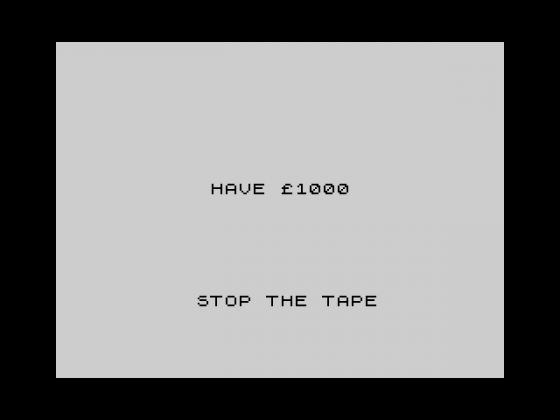