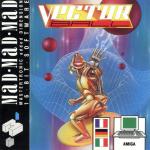 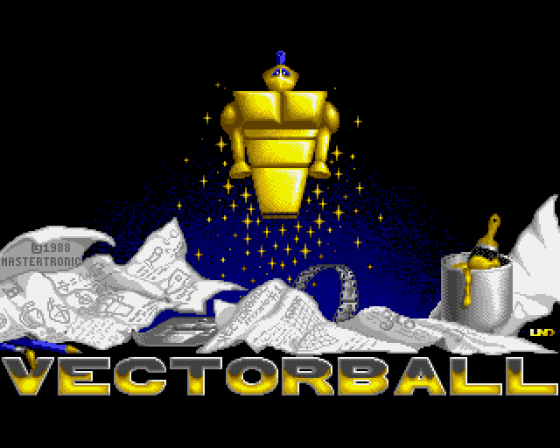 Future sports have taken a turn for the worse. Vectorball is such a game played in a long rectangular arena over a contoured pitch. Two robots fight over a puck-like ball and guide it into the opponent's goal.

You first select whether the droids are under computer or human control - effectively, one-player, two-player or demo modes - then the type of pitch, and duration of matches (three, five, or seven minutes). The friction level is finally chosen, which determines your maximum speed and ease of slope climb.

The Hills, The Ditches, Wave City and Megamix are the four courses, and are made up of various hills and dips. Your robot is steered around this area, and the ball collected on contact; when in possession, it is fired in whichever direction you are facing. Each tournament is played through four matches, all on different pitches. Yyyaaawnnnn... 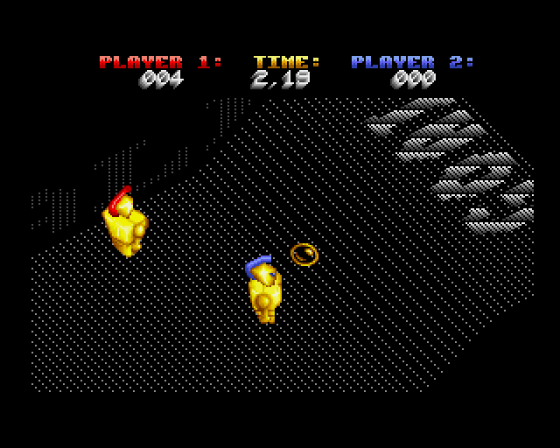 This is like A 'n' F's Xeno, only with slopes, and nigh on zero playability. The pitches and droids are all very high-tech looking, but robot control is very difficult, and the contours make things a lot worse.

No matter what friction level, you whizz all over the shop, waggling the joystick in a vain attempt to score a goal. Ball possession is no guarantee of progress, as a shot spits the ball a feeble distance ahead of you, to be picked up by your opponent. To call Vectorball frustrating is a big understatement, and its visual novelties are just a pain.

The 3D playing area is nicely drawn, with effective contour patterns, and the movement across them is quite realistic. But (and this is a big but), the game itself is totally unplayable! It's virtually impossible to gain any control over your drone and the feeling of helplessness is driven home as your opponent scores goal after goal when all you can do is sit and watch.

Another aspect that doesn't help any, is the unbelievable amount of delays. If you want futuristic ball sport, dig out Ballblazer - don't even consider this.

Presentation 29%
A number of options, but the control system is a joke.

Graphics 68%
The contoured grids are attractive, but flick-screens are confusing.

Lastability 9%
It doesn't get much easier.

Overall 11%
An unplayable attempt at a future sport game. 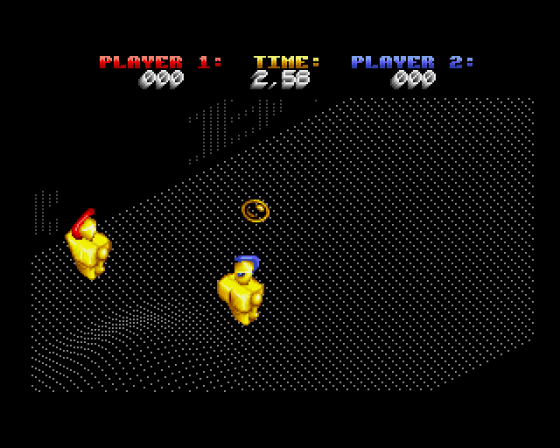