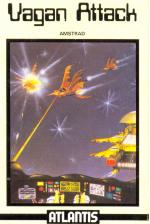 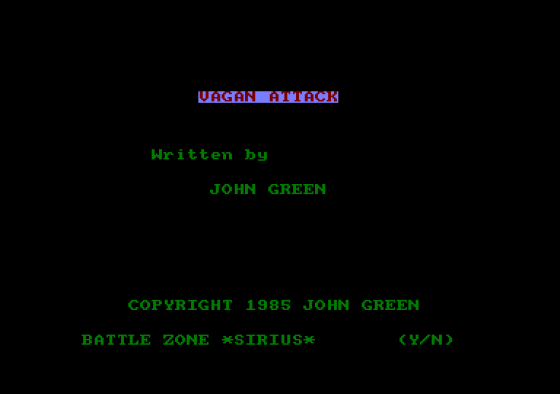 Star Trek was one of the earliest and most popular computer games - and some of us still enjoy the odd game. This latest version sticks to the original format, ignoring fancy graphics, and sells for a rather attractive price.

The invading aliens are the Vagans and you command the starship Andromeda. Earth's last hope. The battle takes place in an 8x8 galaxy with each of the 64 quadrants also split into 64 sectors. Located within this area are the Vagan ships and starbases. all of which you have to destroy. The number of aliens depends on which of the nine levels of game is chosen, as does the number of starbases supporting you.

The ship begins in a random quadrant and sector in the galaxy. The screen shows either the quadrant, long range chart or galactic chart on the left and a series of figures on the right. These inform you of the status of the ship's stardate. time left, quadrant, sector, plasma bolts, quadrant status and energy. At the bottom of the screen is space for entering commands and receiving sub-space messages about the situation.

You will have been given the information on how many Vagans there are and how long you have to destroy them. First you have set about finding them, then getting to them and then blasting them into space dust. Aliens can be found on the quadrant or long range charts. These also show starbases, planets and vagan bases. Once found, the ship can home-in using its two drive systems. Ion drive will get Andromeda between several sectors while Tetron drive warps it quickly between quadrants.

When in a sector containing enemy ships there are three ways of disposing of them. The most effective is plasma bolts that destroy with only one hit. Lasers are also useful and you have to specify direction for both weapons and strength of the lasers. The lasers will often take several hits to work but an anti-matter bomb will destroy the contents of a whole quadrant, including you if you're still in it. You only have one bomb so save it for heavily infested areas.

Starbases are dotted around and moving adjacent to them docks the ship and replenishes energy and plasma bolts. Like the Andromeda these can also be destroyed by enemy fire and you need to watch out for the enemy bases that fire powerful plasma bolts.

The game can have one of three endings the destruction of the Andromeda, running out of time or successfully completing your mission. There's nothing very new in the gameplay, graphics, sound or anything else but it brought back pleasant memories of games of Star Trek played on my old school's Research Machines 380Z and, for £1.99, it's not a bad little game.

Once again the Federation had been caught by a surprise Vagan attack. Once again I alone stood in the way of Vagan domination of the galaxy. Once again I had only 55 star years to complete my task. Once again there seemed little to say about a game that is completely unoriginal except that, at the price, it's pretty good value.

There's little to say about a game as completely unoriginal as Star Trek except that, at the price, it's pretty good value. 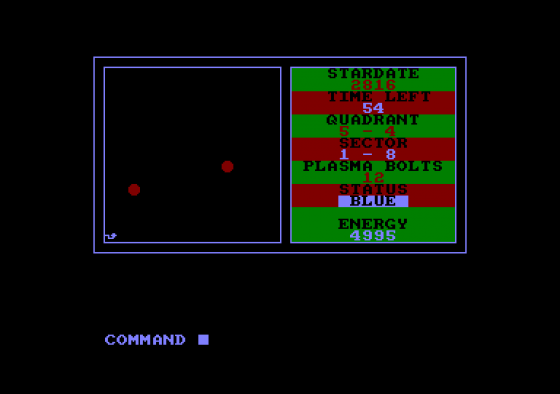