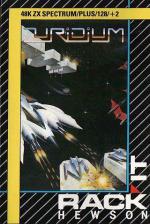 Hewson's Uridium caused quite a stir when it was released for the Commodore early in 1986. Nobody thought a successful Spectrum conversion was possible. But then they hadn't reckoned with Dominic Robinson, had they! His version of this immensely successful, horizontally scrolling shoot- 'em-up retained all the excitement and atmosphere of the original.

As your Manta craft moves over a series of enemy cruisers, inflicting crucial damage and shooting ancillary craft, it can loop and roll to avoid obstructions on each battle cruiser's hull. Fail to negotiate a treacherous obstacle in time and your sophisticated craft explodes. A two-player option allows you to tackle the vital mission with a friend.

Uridium's smooth scrolling and impeccably presented gameplay combined with the slick shadow effects which denote the position of your craft as it moves over the bas-relief landscape, were extremely smart in their time and haven't been successfully emulated since. Dominic Robinson's conversion of Andrew Braybrook's successful game remains almost unique - at £2.99 it's a steal!

Uridium's coding was extremely smart in its time and hasn't been successfully emulated since.