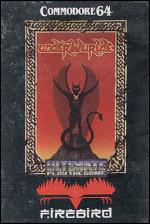 Underwurlde is the second in the series of the Sabreman adventures and is a follow on from Sabre Wulf.

For reasons best known to himself, Sabreman has got himself trapped in the Underwurlde and is now desperately trying to escape. Three Guardians block three exits and to solve the game they must be removed by finding and collecting three weapons, a bow, a dagger and a torch, that have been abandoned in the darkest comers of the Underwurlde. Each kills a particular Guardian and that Guardian only -- no clues are given, so it's up to you to work out which weapon kills which Guardian.

The game is presented in the same fashion as a platform game, but unlike most platform games Underwurlde is really huge (plenty to keep the cartographers going). The playing area is split into two distinct sections -- the castle and the caverns, although the two merge into one another. The game 'flicks' as you move from screen to screen rather than scrolling, which adds to the surprise element -- you are given no indication of what lies ahead.

Sabreman is a pretty tough character -- he can take quite a tumble, but if he falls further than a screen and a half, he dies. The game may sound easy because of this, but Underwurlde has been cleverly constructed so that lives are swiftly lost. There are much needed extra lives which can be found, but they are pretty few and far between.

You start the game in the castle section, but the only way to make progress is to go down into the depths of the caverns. The castle has been constructed so that most of the screens run together to form vertical shafts, with a few horizontal passages connecting them.

Travelling up and down these shafts is by no means easy. Ornaments such as clocks, birds and flower baskets, are littered around the screen and it is by jumping from one to the other that you can make your way from screen to screen.

The caverns, on the other hand, are completely different. Again, the layout comprises deep shafts with a few horizontal connections, but getting from one screen to another needs a totally different approach. If you arrive at a ledge at the top of a shaft, then just walk off it. Sabreman automatically does a huge jump and hooks a rope to the ceiling. You can then lower him down and drop off at the bottom. Going up (if there is a rope present) is done in similar fashion -- jump onto the rope, press the 'up' key and he goes up. When you reach the top of the shaft, use the left and right keys to swing yourself backwards and forwards, jumping off the rope when you've built up a large enough swing to land you safely on a ledge.

If you find yourself at the bottom of a shaft without a rope, then you have to make use of gaseous bubbles that emerge from craters on the floor. If you stand on a crater long enough then a bubble rises and you ride it to the top of the shaft. Simply jump off onto the ledge at the top when you get there. If you don't then you get carried to the ceiling, the bubble bursts, and you fall all the way down again.

Harpies and Gargoyles live in the Underwurlde, travelling around creating havoc for Sabreman. Unusually, they don't kill, but knock him around -- a big hazard if he's standing on a ledge halfway up a shaft and gets knocked off (whee splat gently syndrome). Luckily you're not defenceless, and a couple of well-armed shots from the weapon you carry destroys them. Later on in the game the eagles emerge. These are the biggest pest of all because they lift you off the ground, where you hang, helpless, in their talons until they drop you (usually down a very deep shaft)!

The jewels littered around the caverns may be picked up. They turn Sabreman blue and make him invincible for the duration of a countdown.

Underwurlde is huge (over 500 rooms) and requires a lot of mapping, so to save you the bother your good ol' chums at ZZAP! have done one for you (in two parts, so not to spoil all the fun). Turn to the tips section -- all you've got to do is fill in the locations of the weapons. Aren't we kind!

There are an increasing number of really good arcade adventures appearing on the 64 and I don't think Underwurlde is one of them. It's over a year old now, and in my opinion it shows. When the game first appeared on the Spectrum I was in something of a minority, as I didn't think it was anything special. The same will probably hold true now! The graphics and sound on this conversion are nearly identical to the original (probably something to do with the licensing deal with Ultimate). While this wouldn't have been a bad thing several months ago, it now makes the game look somewhat dated. The sound is atrocious, with a terribly out of tune piece of title screen music and weak spot effects. As arcade adventures go this isn't bad, but then it's by no means brilliant.

Being a great fan of the Spectrum version, I eagerly awaited the CBM one. Though not exactly disappointed with the end result, I hadn't expected the actual game to seem so crude compared to other 64 releases. The graphics are okay, practically identical to those on the Spectrum, although the main sprite does flicker now and again which is something I wouldn't have expected on the 64. Not a bad game, but not really worth the money asked for it.

Okay, so I'm on my own about this, but I reckon Underwurlde to be one of the best aardvarks available for the 64. After all, any game to have kept me attached to a Spectrum keyboard for some weeks must be pretty amazing. There's something about this which really keeps me coming back for more; it's got exactly the right balance between total frustration and

maddening addiction. The 64 version does look almost identical to the Spectrum, but has clearer, smoother graphics, plays slightly faster and is more difficult than the original. Maybe Firebird could have done something slightly better with the graphics, but I feel that could well have ruined the game, which I think is brilliant as it stands. The sound is very poor though, and could have been improved immensely. The marks below don't realty reflect my personal opinion (because I know the others disagree with me), but if you do want a superlative arcade adventure then go and give Underwurlde a try; you'll either love it (like me) or hate it (like Gary).

Hookability 80%
Getting into it is tricky...

Lastability 73%
...but getting out is even trickier and can be frustrating.

Value For Money 59%
Overpriced for an ageing adventure.

Overall 69%
More playable than Ultimate's last two releases but it could, and should, have been better.

More playable than Ultimate's last two releases but it could, and should, have been better.