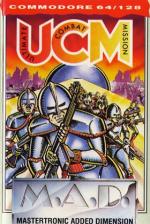 At the dawn of the 22nd Century, Earth's jails had become vastly overcrowded. As a solution, a huge orbiting space prison was constructed; confined within its walls were two notorious felons, Mandroid and Warmonger. Adopting either character, the player's aim is simply to escape. Alternatively, a simultaneous two-player option is available.

The vertically scrolling prison is constructed over a series of platforms which are jumped over or walked around. Warmonger is armed with a pump action machine gun, Mandroid with a surgically implanted robotic laser; both are used to annihilate the waves of onrushing guards. Some guards carry rocket launchers which the escapees can pick up and use for a limited time. At the end of the prison a supply shuttle awaits to take the convicts to freedom.

An information strip at the foot of the screen reveals both players' scores, plus the lives and weapon strength remaining.

The scenario behind UCM is a thin veil over a rather drab budget shoot-'em-up. It simply consists of firing ping pong ball bullets at onrushing sprites whilst avoiding the same.

The only variety appears in the relative peril of the landscapes, since jumping does test platform skills and provides more excitement than the blasting. The worst fault is the character collision detection around bullets, from which the gameplay suffers greatly.

These criticisms aside, UCM is adequately playable, providing some short-term fun; in the long-term, however, there's too little variety in graphics or gameplay to deserve attention.

From the start, it's obvious that the programmer has used program routines and graphics from a mixture of games and Compunet demos which did their jobs well in their original settings.

They have then been blended all together but the mixing process hasn't been well thought out at all, and the result is little more than an exercise in programming effects and putting as many off-the-shelf sprites as possible on the screen at the same time.

Control of the 'Commando' often sticks and if you can get it to play in two player mode you can laugh as the other player's joystick influences your movement.

Sound 49%
An average tune plays throughout.