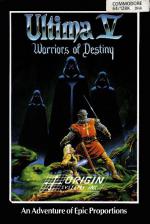 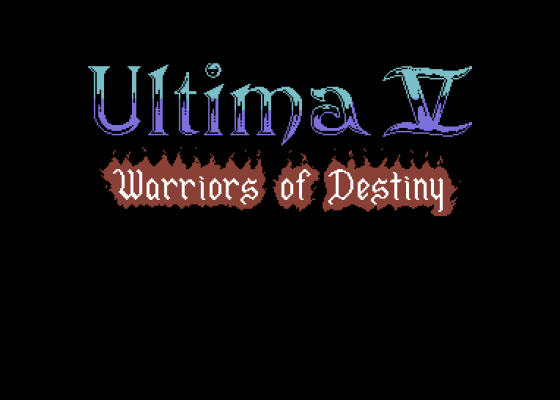 The Ultima series of the most successful sagas in the history of computer gaming. All five tales are based around the mysterious "Lord British", who is the firm but benevolent ruler of the mythical land called Brittania.

British tries to keep his kingdom free, but behind every corner lurks an evil usurper who is only too willing to take over British's throne.

It all started with Ultima I, when the evil Wizard Mondain tried to slowly subvert the Lords of the land against British. Ultima II challenged to conquer evil and lead the nation into a period of golden prosperity, whilst in Ultima III the evil hordes had once again reformed, and you had to go in search of the elusive Exodus to quell them. Ultima IV saw you put the world to rights for British once again. 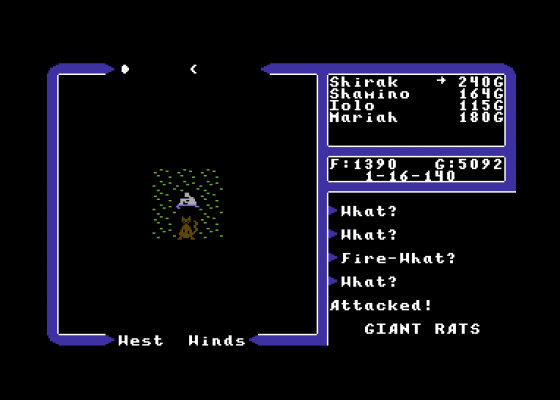 So when you feel the tingling feeling of teleportation happening, you know that Lord British needs you. And this time in Ultima V, he needs you more than ever!!

When you arrive in Brittania, your long-time friend and adventurer Iolo, quickly informs you that Lord British is missing!! However, before he can explain in further details, three dark, malevolent evil beings turn up and shoot Iolo with a magical arrow, which all but kills him. Releasing that you are in mortal danger, you quickly make your retreat into the night.

Making haste you reach Shamino's house, another old adventurer friend of yours, where you manage to get Iolo patched up. It is here that you learn that British has been lost, presumed dead, on an expedition to explore the newly discovered underworld. Lord Blackthorn, British's trusted and respected friend, has assumed control. 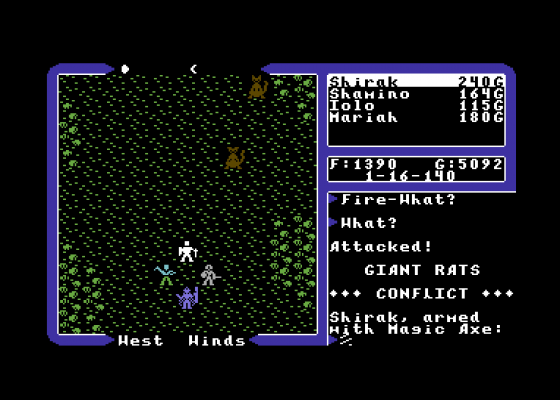 Tyranny grips the land. The people of Brittania are oppressed and downtrodden. You realise that you and your two companions have to do something about it. But what??

This is the major problem you are pitted with in Ultima V, but there are many, many others. The game itself is well structured. Your group is depicted in the game as an individual person, who wanders about from town to town. If you get into a combat situation you are quickly whipped off the screen and replaced by a [some text missing] contains your party plus the opponents you are to fight. You then have three options: retreat, fight or die.

The combat system is somewhat put in the shade however by the realistic, living world that surrounds you. The game is all about exploring and putting little pieces of information together, so that you get the whole picture. As you travel the world, you will come across towns, settlements and individual huts. Depending on the time of day, the people in the towns will react differently. If you approach shop keepers as dinner time or closing time, they will rudely tell you to come back when they are open. 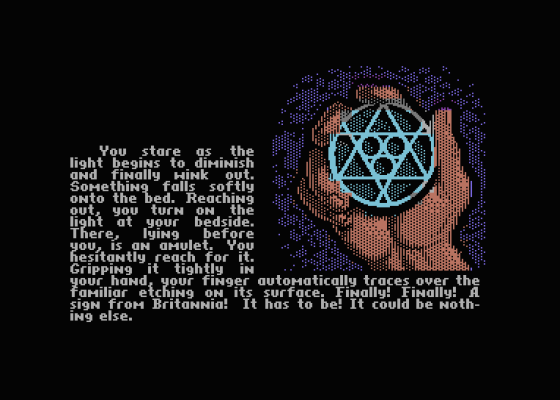 What makes the game for me is the role-playing angle. You see, in Ultima V you can talk to near enough every character you meet, and this alone means over a couple of thousand people!! All have something to say and their conversation can range from the release of Ultima's next product to where you can find a holy shrine.

Some characters, like yourself, can cast magic spells. A wise player only casts well known spells in battle or dire consequences may occur. Spells range from the useful 'Negate Poison' to the very useful 'Great Flame' in which a great ball of fire smashes into the victim, doing immense damage.

There is a great deal of humour in the game. I met a magician who was looking for a talking horse, and would reward me if I found it, a demon who had renounced evil and was working for the forces of good, another magician who had turned himself into a mouse via a magical accident and a farmer, plus several other people, who were in the mysterious "resistance", but would only let me in if I knew the password. Oh, there was also the farmer who was bored with his lot and wanted to be a fantasy role-playing author!! He gave me all kinds of information on Origin's next product.

Turning to the negative aspects of the game for a moment, I wasn't too impressed with the graphics. Both your party and the monsters look like matchstick men who have been on a four week Arnie Schwarzenegger body-building course, and the colours of the countryside were pretty lurid. Furthermore, the sound is nothing more than a series of bleeps and clicks.

Dungeonmaster, the yardstick by which all computer Fantasy Role Playing games are judged, would slaughter this game in that respect. However, in return, Ultima V would leave Dungeonmaster standing when it comes to interaction with characters, combat tactics and strategy. The game is also nicely packaged and it contains the usual Origin freebies. This time you get the obligatory tea towel/map plus a large coin that is supposed to be the codex of Ultima wisdom. I only wish it was!!

Ultima V is a marathon of a game. One of the best computer RPG's I have played.

A marathon of a game. One of the best computer RPG's I have played. 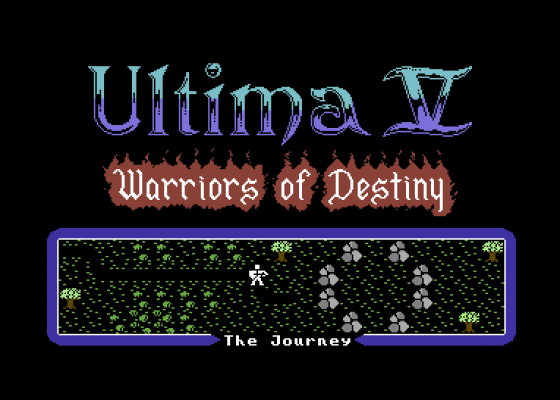 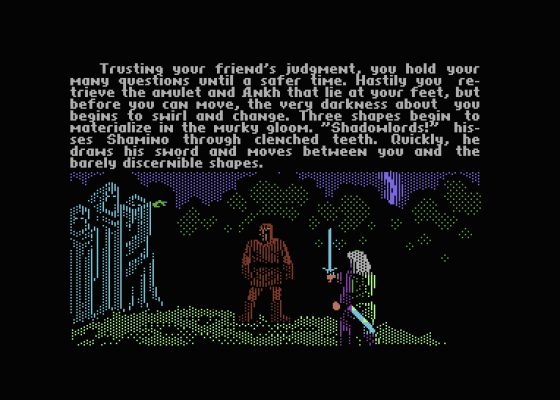 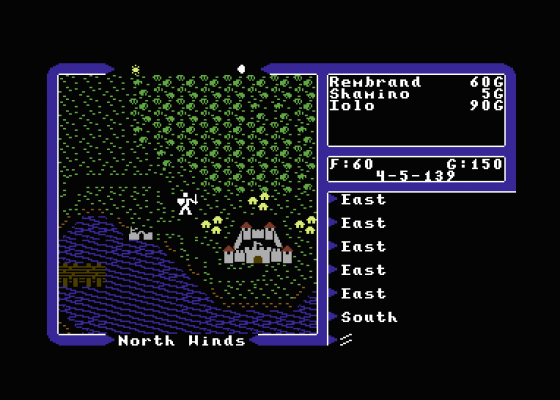 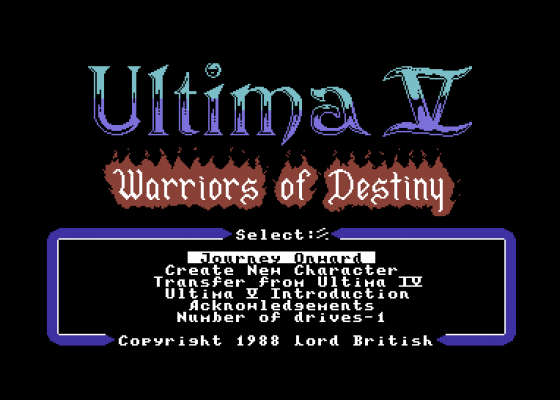 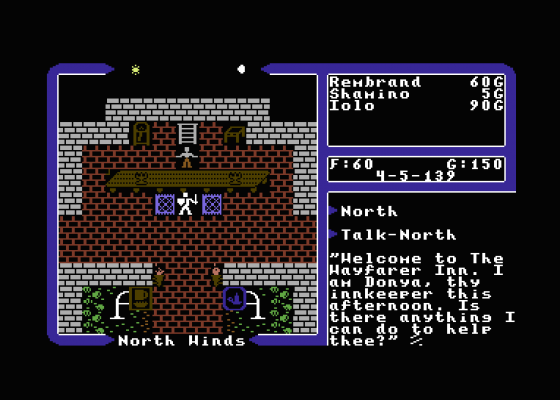 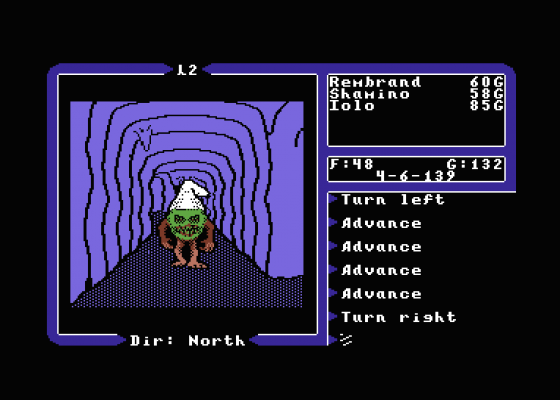