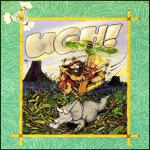 Since the dawn of time, mankind has dreamed of flying! For some the dream became reality - Miles "And The World Miles With You" Guttery reaches for the sky... 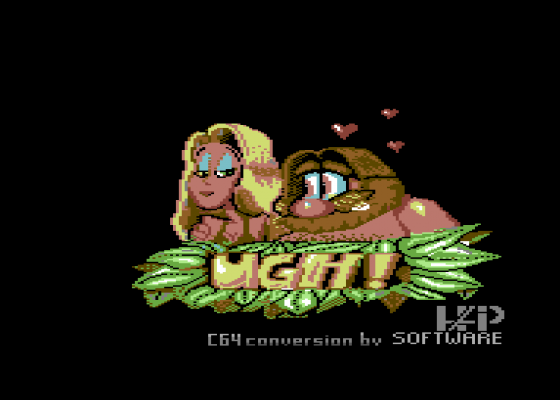 Ugh was a happy man. He lived in a tasteful middle-class cave on the better side of the mountain and enjoyed a contented existence. Contented, that is, until something terrible happened - he fell in love! No longer could he spend his days lazing around the cave or clubbing passers-by. With love comes responsibility, and sure enough the light of his life was soon demanding a new washing machine, vacuum cleaner and dinosaur-skin rug (Women, eh?). Not wanting to lose his new found babe, there was only one thing for it - he'd have to earn some money!

In prehistoric times career opportunities were very limited. Undaunted, our entrepreneurial ancestor came up with an ingenious scheme to rustle up cash. Noticing how his lazy neighbours hated walking, it occurred to him that it he provided a transport service (for a small fee of course), he'd clean up. All he needed was the right vehicle for the job!

Being a practical kind of guy, he combined his carpentry skills with a little knowledge of aerodynamics plus elevation-against-lift theory, and the result was a crude but effective helicopter - albeit pedal-powered! 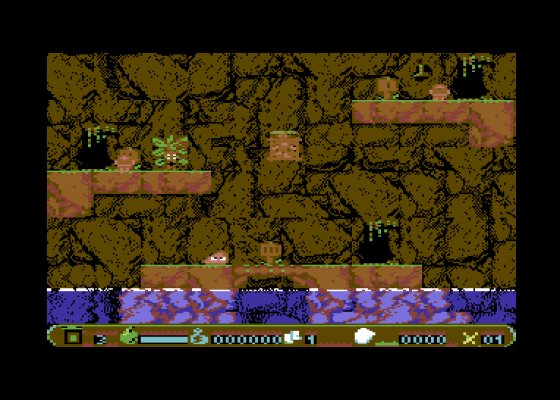 That's how the world's first airborne taxi service came to be.

Ugh!'s made up of a series of single-screen levels, each containing a number of platforms.

Intermittently a caveman will emerge and tell you which of the (numbered) platforms he wishes to visit. You take the role of Ugh and control his contraption, helping as many fellow cave-dwellers as possible. Be quick though - it you leave them hanging around for too long, they won't pay. 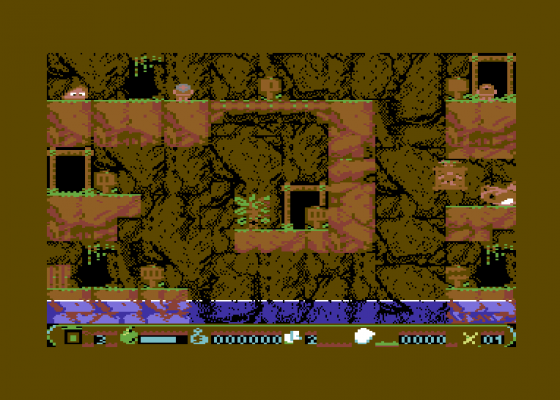 Even on the early screens the helicopter's tricky enough to fly due to the heavy inertia it generates. Later, things get seriously hair-raising as the computer throws in various dinosaurs and obstacles to hinder your progress! Peddling's tiring work, so keep your energy bar topped up by dropping a boulder on the trees and munching the fruit it dislodges.

Having seen a demo version some time ago, the arrival of Ugh! was eagerly awaited in the office. When the big day finally came, we fought amongst ourselves for the honour of breaking open the packaging and loading it up. A mixed reception followed. It's an original idea, but it's hindered by some seriously frustrating gameplay - one small slip can mean having to start the screen all over again! Thankfully, a handy password system's included, avoiding repetition of screens. Nevertheless the office Commodore did well to withstand a verbal battering that was (to say the least) very heated!

If you're looking for a game that takes time to complete, then Ugh! certainly provides a stiff challenge. Those with a low frustration threshold should think seriously before they buy. 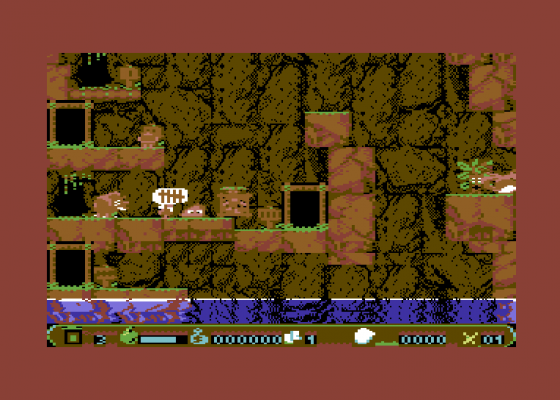 Despite a few niggles, Ugh! is a highly original game which should provide a great challenge as long as you are willing to persevere...

Ugh! could have been a Hurricane Hit, but it's seriously marred by appalling presentation and gameplay flaws. For example, if you hit a platform too hard you die - fair enough, but why do you fly straight through it and disappear off-screen, which then flicks to the intro page?! A small explosion wouldn't have gone amiss.

Also, when you run out of energy, the screen also flips without warning, or any indication of what's happened! This may not sound too annoying, but, believe me, it is - it gives it a tatty, unfinished look. 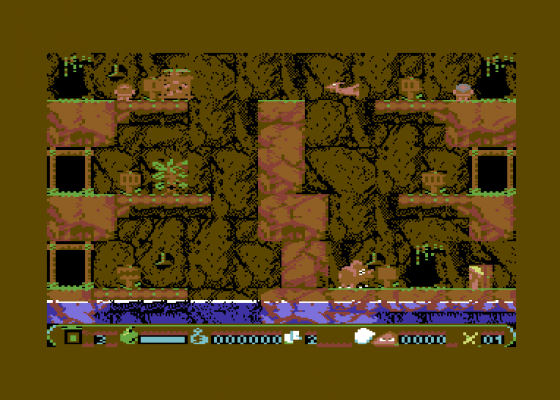 Worst of all is the horrendous, insane difficulty level. Your energy runs out so quickly, it's untrue! To make matters worse, when you 'bomb' a tree to get fruit, it often bounces off the screen, and even if it doesn't you have to be damned quick to get to it before it vanishes!

Ugh! is undoubtedly good, but by no means great. If they'd invested a little more time developing the product it'd be a killer, but as it stands it's a bit of a wasted opportunity (sob!).

When you cast your eyes over Ugh, first impressions are very commendable. But even though the graphics may be detailed (the shimering water effect is fantastic), play soon becomes very frustrating. 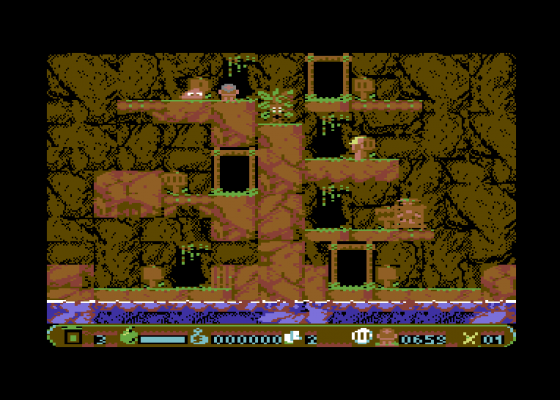 The most sensitive joystick movement is required; thrust the stick around and the propelled elevator careers through the platforms into the water. This would prove challenging but later levels are beyond comprehension - time a dive wrong and you're stuck underneath a ledge waiting for the caveman's energy to run out!

Ugh! is a great and original concept, but when addiction leads to annoyance, you soon look elsewhere.

Hookability 72%
Frustrating until the controls are mastered

Lastability 82%
Perseverance will pay off in the long run

Ugh! is a great and original concept, but when addiction leads to annoyance, you soon look elsewhere. 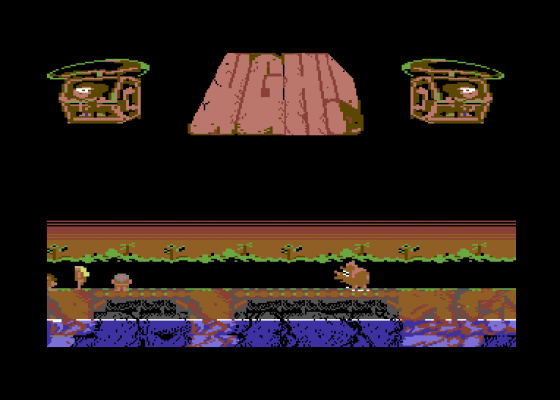 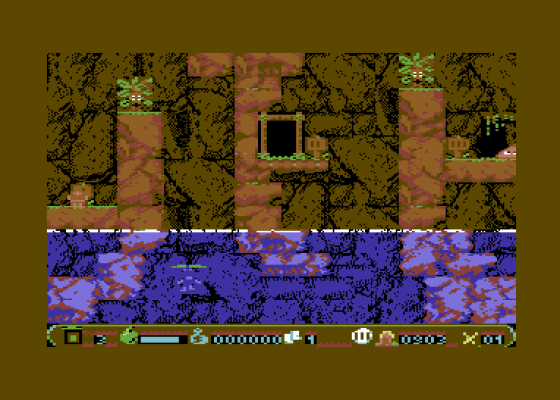 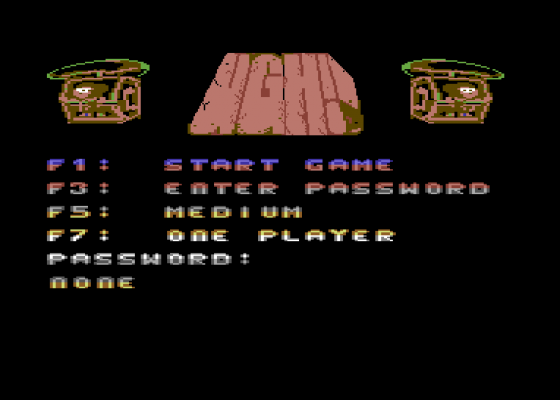