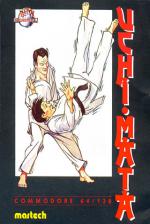 There are fight games and there are fight games. As far as I'm concerned they're the last word in boredom, and if you're not tired of them by now, you're probably the kind of guy who goes to see Death Wish III and loves every minute. Mind you, in every trend there's a trendsetter, and at the moment this is definitely it.

Uchi Mata is a genuine simulation, comprehensively researched and endorsed by a chappy who could probably eat a few reviewers like me for lunch. Nice game, Mr Jacks! Obviously there are superficial similarities to Fist (et al). You've got two combatants set in a pseudo 3D arena, performing various manoeuvres on each other and playing for points. Once you start fighting you'll see the differences - it's far more tactical for starters and a good deal more energetic.

The joystick controls are a little hard to get used to, more movements than simple positions (the Uchi Mata, for instance, is right and then down in one motion) and constantly pushing the fire button to maintain grip and advantage will give you a bad case of sweaty hands in no time.

Personally, I found this 'grip' part of the tactics a little tiresome - essential though it is to Judo it turns out more like a random factor than an element of skill - and perhaps it could better have been incorporated into the throws themselves.

Needless to say, your moves are awarded points and a little man (bearing an uncanny resemblance to Magnus Pyke) appears top right to describe your success in a kind of semaphore.

Apart from throwing, you also have the ability to roll throws, again dependent on your skill with the joystick. This aspect is affected by your stamina, the more often you end up on the mat the harder it gets to stay agile. Oh yes, and if you cheat or fight dirty you end up kneeling to your opponent to acknowledge defeat.

The animation is excellent, lacking in OTT sound effects or mile-high leaps, and Martech generally deserve much credit for this excellent simulation. If all things are equal, Uchi Mata would deservedly race up the charts. Unfortunately it's more likely to be tarred with the same old beat-'em-up brush, and subsequently be knocked for being over-hard and under-spectacular.

Take it or leave it, I guess. Personally I'll take it.

Take it or leave it, I guess. Personally I'll take it.