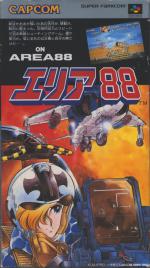 The enemy menace have massed one of the biggest armies ever, bristling with tanks and aeroplanes of just about every description! This massive force is the tool of a dictator intent on taking over the world, and by the time this game starts, he's almost done it!

As we speak, enemy forces are massing to take over the last remaining alliance base: Area 88. Only three pilots remain with which to take out the enemy, namely Shin Kazama, Greg Gates and Mickey Simon. It's their job to take to the scrolling skies as the UN Squadron - the last remaining force upholding truth and justice (with a little help from some rather massive artillery and a choice of death-dealing ships!).

But as time passes the enemy move ever nearer, so part of the UN Squadron's job involves protecting the last base from enemy attack. Strategy was never the good guys' forte, because the base is vulnerable from air, sea and land-based attack! So keep an eye out for enemy subs, lorries and stealth bombers!

Boasting some of the most spectacular scrolling ever seen in a console game, the dive-bombing section is a small bonus sub-level that enables our heroes to gain a little extra cash.

At the bottom of a dangerous canyon lies a mobile enemy base. Blast this into oblivion before the time limit expires and loads o' dough is yours for the taking!

Missions can be selected at will, provided they're within the boundaries of the illuminated part of the map. The illuminated area only gets larger once all of the enemy forces in the area have been annihilated.

At the far right of the map lies the enemy base. Blast this into oblivion and you're a hero!

The defence spending cuts really cause our heroes some aggro in this game. The only way to get some cash to purchase hi-tech weapons is to blast all enemy artillery painted red.

This releases a red icon that endows the player with some more cash. The shop is visited at the beginning of every mission.

The range of weaponry is too vast to list here but includes the likes of massive three-way lasers. Gatling guns, and energy bombardments!

The excitement level generated by Super R-Type was enough to have most people running for a change of underwear, but UN Squadron (or Area 88 as those funky Japs calls it) is better still. It's got better graphics (and very artistic they are too), it hardly slows down at all, it's bigger, and it's very tough to master!

The game's difficulty level is pitched at just the right level. Things start off pretty simple but by the time you reach level four, the sheer amount of enemy hardware out to blast you really makes things difficult.

UN Squadron simply oozes polish, from the excellent intro to the massive explosion of the last end-of-level boss. If it comes to a toss-up between this and R-Type, UN Squadron comes out tops every time. But if you're a really flush (or indeed, flash) geezer, get 'em both for the best console blasts available in the omniverse!

There are three heroes selectable at the beginning of the game. Shin Kazama is the token female of the squadron. Though her power-up abilities are limited, she's the fastest flyer. Greg Gates prefers a more powerful ship at the expensve of speed. Mickey Simon is the last member of the squad. Both his power-up capabilities and speed are average.

Using some of the cash gleaned from each level, it's possible to completely new aeroplanes! Each new 'plane is more manoeuvrable than its predecessor and can carry more special weapons at once. Also worth noting is that each ship can use more power-ups, thus increasing your destructive potential!

1. F8E Crusader (Power Level 5) The bog standard ship. Not that nippy and it's crippled by a low power-up capability.

2. F20 Tiger Shark (Power Level 5) The F20 has the same power-up level as the Crusader, but has greater speed and uses different special weapons.

3. F14D Tomcat (Power Level 5) More special wepaons can be crammed onto F14D than any of the other POWER 5 ships. It's also a bit faster too.

4. A10A Thunderbolt (Power Level 3+3) Capable of higher speeds and carrying an even more lethal range of weapons than the Power 5 ships, the A10A is very powerful indeed and carries downward-firing missiles on board as standard.

5. YF23 Stealth Ray (Power Level 6) Another Power 6 ship, the Stealth Ray has slightly inferior firepower than the A10A Thunderbolt; but its stealth abilities enable it to completely fox any kind of homing missile!

6. F-200 Efreet (Power Level 7) Another ship with stealth abilities, the F-200 is capable of carrying every single special weapon available to the UN Squadron! It's the nippiest ship there is, and is the only Power 7 ship in the whole game!

The basic gameplay of this Capcom arcade conversion is much the same as the coin-op. However, the strategy screen was not evident in the arcade machine and each character only had one ship to fly during the game. Some of the level geography has also been altered in this Famicom game.

Arcadesters will know that the follow-up to UN Squadron, Carrier Airwing, is also out and about in the arcades. This features the same basic gameplay but had far superior graphics.

I thought that Super R-Type was good - but this is even better! Featuring knockout graphics, stunning sound, superlative gameplay and a tough, tough challenge, UN Squadron (or Area 88 as it's known in Japan) is one of the best blasters available on any system.

It's not a true arcade conversion; instead it incorporates levels from the coin-op and adds a whole load of new features, making this a much bigger and more varied game. The graphics really are stupendous, with beautifully drawn backdrops and perfectly detailed sprites - check out the screenshots and see what I mean.

What you can't see though, is how it plays. But take it from me, this is a fast and hard game. The action is frantic, and much dodging and weaving is required to battle through the levels. The difficulty level is nicely balanced, and the action completely addictive, keeping you playing and playing until your trigger finger aches.

I've already said that Super R-Type is a must for your Super Famicom. This is even more of a must!

Presentation 90%
Some Japanese text, but it's not important. Other than that, very well presented from beginning to end.

Graphics 94%
Some of the most superb backdrops on any video game, and brilliant sprites to boot.

Playability 94%
The shoot-'em-up action is addictive from the word go.

Lastability 91%
Even completing the game on easy level takes some doing!

Overall 94%
The best shoot-'em-up on the Super Famicom. Even better than the coin-op original!