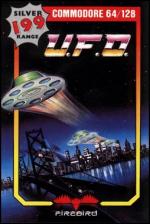 The city of New York lies glistening in the summer sun, when suddenly an alien fleet plummets out of the ozone-blue skies and attempts to lay waste America's pride and joy.

As the only available trained pilot of the experimental F21 Condor, the task of dealing with these extra-terrestrial terrorists falls straight into your lap, and so you set forth to do battle with the alien fleet.

Your Condor fighter initially appears with the 'Big Apple' in the distance. Waves of attacking aliens come zooming toward your ship, which moves around the lower half of the screen, blasting any ships within range.

The Condor's armament easily deals with the approaching alien vessels, but, if used too frequently, overheating occurs, temporarily shorting out the systems and leaving you defenceless.

Any unavoidable barrage of fire can be negated by use of the Condor's shields, activated by pressing the Space bar. Although impervious to the alien firepower, the shields only last a limited amount of time, therefore they should be used sparingly to avoid complete drainage.

Successfully blasting all of the attacking fighters allows access to the hypersonic transit corridor, which leads to the next region of combat.

Straying to the edges of the air corridor depletes the ship's energy, the loss of which causes the Condor to reappear back at the New York battlezone.

On reaching the end of the corridor, the Condor's energy and shields can be replenished, ready for the next onslaught.

As budget blasters go, UFO isn't exactly the cream of the crop: there's a fair amount of death and destruction for your money - but little else. It takes quite a while to finish any of the levels, and seeing the same, albeit very smart, screens all the time proves too uninteresting to justify its purcahase.

Nice to look at, and fun for a while, but hardly worth saving up for.

U.F.O. looks quite nice, but the pretty graphics simply don't compensate for the lack of gameplay. This sort of basic shoot-'em-up would have probably gone down very well three or four years ago, but not now - even at two quid!

I soon grew tired of repeatedly shooting aliens within a limited playing area, and the change of backdrop makes very little difference. It's sad to think that Odin may well have lost their touch - I sincerely hope they pull their socks up for their next game, and prove that they can still produce high quality software with plenty of playability, and not just glossy presentation.

Once upon a time, Odin were producting brilliant stuff like Nodes Of Yesod and Mission AD - now they've sunk to this.

UFO is visually and aurally pleasant, but unfortunately it's almost totally devoid of playability. The rocket moves very slowly and is sluggish to respond to the joystick.

Consequently the battle against the myriad of fast-moving and bomb-spewing alien ships is one-sided and frustrating. Another annoying point is that all the action takes place in the bottom third of the screen, with the rest playing no part other than to look good.

Overpriced, even at two quid.

Presentation 53%
Nothing special - unhelpful instructions and no real options.

Graphics 73%
Smart backdrops and effective animation on the ships and aliens.

Lastability 16%
Different backdrops do nothing to relieve the tedious nature of the game.

Value For Money 29%
Two quid seems a lot to pay for some pretty graphics and little else.

Overall 19%
An attractive but very limited and unaddictive shoot-'em-up.

This sort of basic shoot-'em-up would have probably gone down very well three or four years ago, but not now.