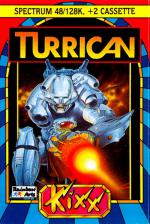 Where did they get this name from? Turrican is a major shoot 'em up blast, first seen last year and it's title has been confusing me ever since.

A mythical science-fiction based, horizontally scrolling shoot 'em' up, Turrican involves clearing five worlds of evil uglies using a space suite man with a futuristic pop gun. Sounds difficult? It is! However to help you along there are plenty of power-ups and special weapons varying from the mildly devastating to the totally annihilating. This includes a a laser whip (OOhh!), a rapid fire laser gun (AAgghh!), smart bombs (KaoBoom!) and mines (and mine's a pint - of milk eh kids?)

The main sprite moves around the battlezone with great speed and agility and by transforming into a gyroscope or by using force shield power up becomes invincible.

Although the graphics and sound aren't stunning, indeed for such a popular game they could have been better, the sheer scale of the action and the speed at which enemies attack, makes this a worthwhile budget buy.

Hop and skip and shoot those baddies. Turrican features lots of action for your money and will not disappoint.

Hop and skip and shoot those baddies. Features lots of action for your money and will not disappoint.