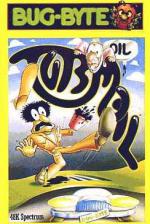 The title is a play on words because the object of the game is to fill an oil can from a constantly dripping source.

Once the screen is filled it is taken to the bottom of the screen, and the action of emptying builds up a car.

When the car is fully built up, it moves off onto the next screen. Each screen is made up of floors, or levels, with ladders, ropes, spring-loaded platforms, etc. All the time you are attempting to fill the oil can.

Some Arabs, wielding wicked-looking scimitars, are after you. Once your paths collide, there is a fierce scuffle, and you are promptly disposed of. Another thing to bear in mind is that the Arabs like things to be tidy. If there are tools lying around it is a good idea to gather them up.

I found the game playable, but not what I would call addictive.

Playable, but not what I would call addictive.