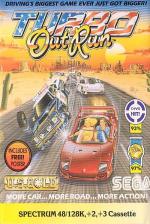 Here it is, the sequel to the mega coin-op machine Out Run. It stars the same Ferrari owning chap, who's traded his Testarossa for an F-40, but not the beautiful blonde - true love! The wild duo decide to show a Porsche 959 owner what a real car is, and a furious race across the States will do nicely.

Four four-stage races are agreed upon, New York to LA. The police hear about this highly illegal race and are keen to stop it. Difficult when your car is capable of quite frightening speeds, but then you do have to reach the end of each stage with the time limit. If the timer is ticking down on you alarmingly, a whack of the fire button gets the turbo charger to rocket the car along nicely (G-force is an optional extra).

Once you've survived the first four stages you enter the garage and have the chance to upgrade your motor. But don't be downgraded personally by losing your girlie to the Porsche owner.

Turbo Out Run is a great game in the arcade, and on the computer isn't too bad. The sprites are nicely drawn, with the F-40 particularly striking. But the backgrounds are more than a little sparse. I'm not asking for a cluttered screen, but a few more roadside objects would have given the player a better sense of speed. The other slight moan I have is the road not being clearly marked: several times I was caught out by a sneaky bend and ended up crashing. This isn't the best racing game I've seen this winter (that honour goes to Chase HQ): I feel US Gold could have done better.

'What can I say about Turbo Out Run that wasn't said in the review of the original Out Run? The game is almost identical. The only difference is that the graphics have changed slightly and you can now smash your way through road blocks and bump over logs in the road. There is also a new car upgrade section that gives you the choice of special turbo, hi-grip tyres or high powered engine. To tell you the truth I didn't notice much difference in performance when I got them anyway. The same old problem of new sections of road not joining together properly has been kept in Turbo Out Run, which is a pity, and the multi-load is still a real annoyance. I wouldn't say that this is the most realistic car racing game around: I mean, the car is so big you can hardly see what is coming up ahead. If you were a big fan of the original then buy this, because it's more of the same.'

I wouldn't say that this is the most realistic car racing game around: I mean, the car is so big you can hardly see what is coming up ahead!