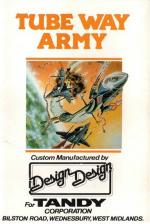 Think you can stand the excitement of yet another Scramble clone? If so, then take a look at this undeniably competent adaptation for the down-but-not-out Dragon. 'Tis guaranteed to take you to the edge of your seat without firing your imagination. All the usual scenery is on show, from the opening acne terrain to the architecturally improbable wall, although none appear as tough as they ought.

My initial wanderings through the alien tube system were an intergalactic doddle thanks to a friendly missile system! I guess some amorphous dude somewhere slipped up. Visually though, it's neat enough and there's an effective synthi vox on board which will count you down to launch.

Of course, Scramble sets are old hat nowadays and the Dragon is already served by Microdeal's own swipe, which, while somewhat ragged, is definitely more difficult. I guess it's best to just fly what fits, eh?

Visually, it's neat enough and there's an effective synthi vox on board which will count you down to launch.