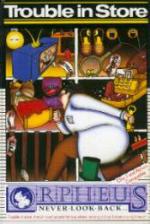 For me, Trouble In Store did not have a good start; it took several attempts to load. However, once it did go in, the game turned out to be enjoyable.

The theme is this - you are the manager of a large store and are troubled with a nightmare. Your products are floating about, and you must rescue the takings in the till. You have to collect a key, then move to the till to collect the day's takings. If you collide with a moving object, then you lose a life, and have to try again. Once you have the money, you jump to the ceiling, and go on to the next screen - the next floor of the store.

Great claims are made about the originality of this game. The idea might be new, but the concept has appeared in other games; but not for the Oric computers. It's fairly amusing, but I'm sure better will come from Orpheus in time.

The idea might be new, but the concept has appeared in other games.