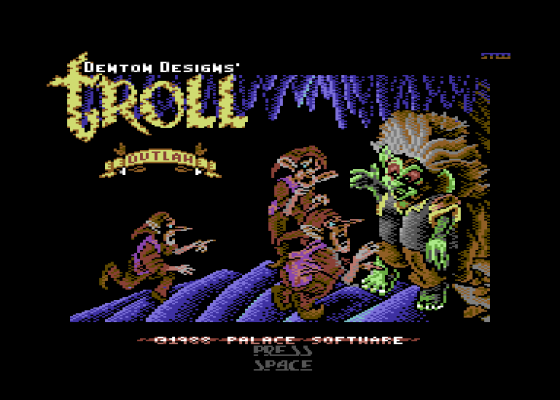 The netherworld of Narc is an unearthly land of crystal caverns, populated by a race of goblins. Into this unusual domain has stumbled Humgruffin, a large and amiable troll. His only opportunity for escape is to reverse the spell that put him there by taking the key crystal from every chamber, and placing each one in its amulet.

The caverns are divided into two sections, a landscape and its mirror image above. These consist of crystal columns of different heights: Humgruffin negotiates columns up to two units in height above or below; any higher or lower renders the way impassable.

Random features appear on the landscape to help or hinder Humgruffin in his quest. Pyramids provide transport from the floor of the chamber to the roof, necessary for collecting otherwise inaccessible items. Wandering spotlights provide passage from one chamber to the next, from which goblins occasionally spring. Fruits and bonus objects provide sustenance for a hungry troll and points for the high score table. 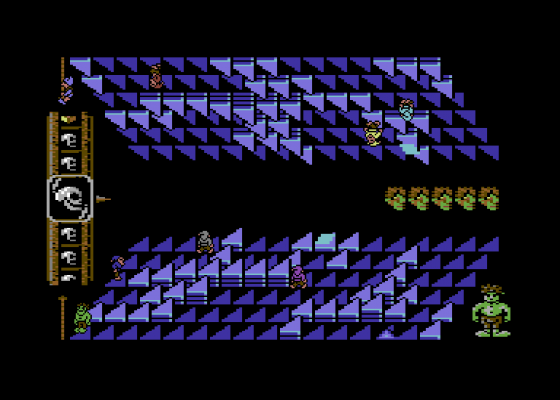 Humgruffin is armed with holes which he keeps in his pockets. Casting one of these onto adjacent blocks is fatal to goblins, but they can also do likewise, resulting in the loss of one of his five lives. Contact with goblins results in Humgruffin gradually turning to stone.

Gems collected are displayed in the top right of the screen and when all are gathered, Humgruffin is free to return to his troll's hole and live in peace.

First impressions or Troll are very favourable: the music and sound effects are both very jolly and suit the game perfectly. Wandering around, jumping on toadstools, collecting crystals and fruit, walking upside down and killing goblins is great fun... for a while. 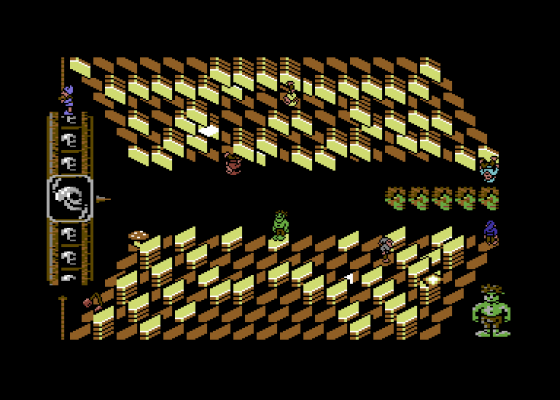 Only after continuous play do its annoying details come to light. For example, some landscape backdrops, although colourful, are obscure: it's occasionally difficult to tell how high the nearest tile column is, and sometimes impossible to see clearly what is on the ground.

Humgruffin is unable to jump without running first, so if he's surrounded by blocks (an occurrence regular enough to be frustrating), he's trapped until his energy runs out or a goblin kills him. These faults don't ruin the gameplay, however, and if you're looking for something a little different Troll could provide the answer.

Troll has some good points in the shape of lovely sprites, great presentation and original gameplay, but unfortunately they're far outweighed by several niggling quirks. The Troll can become trapped - through no fault of the player - and nothing can be done until he dies, which sometimes means waiting for ages for a Goblin to throw down a hole.

Another annoying point is that sometimes the Troll is put on a hole at the start of the screen, and has no way of escaping death. The instructions are also lacking and the soundtrack is nauseatingly jolly and instantly grates. I'm all for original games, but unfortunately, Troll has too many deficiencies to make it a worthwhile purchase.

It's a shame that bouncy music, cute sprites and an idea for a game are all that Troll has. When brought together, they've only been able to gel into a confusing and frustrating, irritating piece of sotware that I found neither playable nor addictive. Sloppy bugs such as the ability to become trapped by platforms, unable to move until you die, and instant death by appearing on a hole at the start of a new game are an unexpected displeasure.

Moving around requires constant platform height measurement, which isn't at all intuitive and is made difficult when all the blocks aren't visible. Moving onto the ceiling exacerbates the problem because the reversed graphics jar with your visualisation of the playing area, reminiscent of the feeling of trying to read a book upside down. The other over-involved gameplay elements didn't invite me any further into Troll and I would advise you to stay away from it also.

Sound 74%
Option of music or sound effects, both of whch are very polished and jolly. Could prove annoying for some, though.

Hookability 73%
The compelling game design and variety of elements are immediate attractions.

Overall 62%
An unusual and moderately appealing game marred by excessive emphasis on luck.

An unusual and moderately appealing game marred by excessive emphasis on luck. 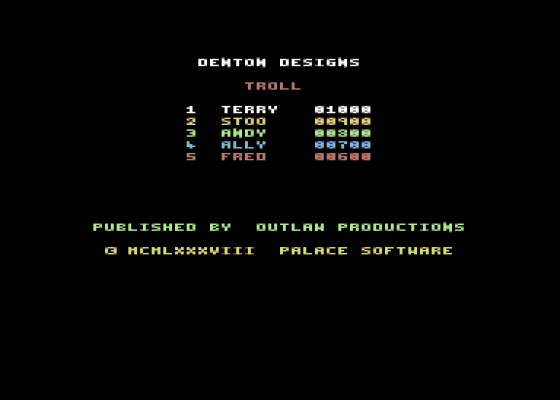