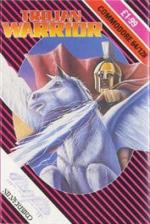 Odysseues, the warrior of Greek mythology, has travelled through time and space on his pure white winged horse to defeat the forces of evil. A wicked sorceror (they get everywhere!) has captured the beautiful Princess and turned her magical powers against her, and now she is being held at the end of five zones of boundless perils.

As the Trojan warrior of the title, you have to destroy many hostile wizards and demons to complete each stage, and collect flashing icons which appear in the sky. These give extra weapons, such as increased firepower and star-like drones (multiples). A transporter is entered at the end of each level, and you must then navigate the time tunnels' jagged walls. If you collide with these, you do not lose a life, but you have to replay the previous stage.

Just when I was certain that there was no way for someone to come up with a new disguise for the much-cloned Nemesis format, along comes Trojan Warrior and I have to report that it's really quite good.

Superficially, the game is very good indeed, with well-designed and nicely animated sprites (particularly good on the Pegasus graphic), and some very listenable musical accompaniment to boot.

The gameplay is pretty standard stuff, but the array of weapons that you can pick up augment the carnage well enough and it's easy to find yourself coming back for more when the Game Over message appears.

At this price, you're certainly getting your money's worth.

Software houses these days are dreaming up diverse stories, and graphcs to match, in a vain attempt to disguise their latest Nemesis clone.

At least with Trojan Warrior, *some* sort of atmosphere is generated with the galloping and wing-beating horse.

Graphics are indistinct, but luckily this does not interfere with this mildly enjoyable blast. One thing is very infuriating, though - hitting a wall in the time tunnel - aargh!

Graphics 62%
Can be unclear and blocky, but winged horse animation is pleasing.

Hookability 79%
Hard and fast lasting on horseback is engaging.

Lastability 69%
Only five stages, but skill level is quite high.

Overall 74%
A Greek mythological shoot-'em-up jaunt with lots of playability.

A Greek mythological shoot-'em-up jaunt with lots of playability.