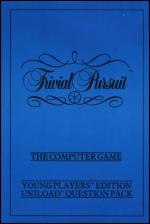 If you thought that the original Trivial Pursuit questions were just that little bit too hard, this could be just the thing that you were looking for. The Young Player's Edition is designed for anyone aged seven and older. Not that the questions are any easier, it is just that they have been restructured for a lower age group to give kids something of a fighting chance when playing against their parents.

The six categories are somewhat different from the original game. They now consist of People and Places, Art and Culture, Natural World, Science and Technology, Games and Hobbies, and Good Times. Questions tend to be on children's books, television programmes and pop records so that parents have a pretty good chance of being totally baffled. Indeed, at the recent Trivial Pursuit Computer Championships, the journalists had a chance to play this version with the average mark being only seven out of ten.

Presentation of the game is exactly the same as the original computer version which is in turn the same as the board game with a few extra enhancements such as score charts. One excellent touch is that the package is available in two versions - game plus question tape or question only tape if you already own the first version. Expansion kits are being planned.

Trivia games on the computer are either very good or very bad. Fortunately, this falls into the former category and can be recommended to any youngster who loves filling their mind with totally trivial bits of information.

Recommended to any youngster who loves filling their mind with totally trivial bits of information.