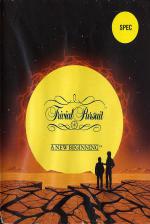 Let's get quizzical - and no cheating!

Taking Trivial Pursuit into space for yet another sequel seems a rather desperate measure, but there are loads of new questions and the gameplay's been tweaked. The game begins on Earth, sometime in the future, when the dreaded 'greenhouse effect' has poisoned the atmosphere. Your mission is to search out the only other known planet that can support human life-Genus 2.Of course there's a hitch, the Elders of the planet will only allow humans on the planet if they collect six objects, won by answering trivial questions.

You start the game by being asked to select the number of players (up to six) and set the question timer. Characters, or pieces, are allocated and then the questions begins If successful you're allowed to board your laser-powered rocket to race around space for those vital objects.

There are six categories of questions, Entertainment; History; Science and Nature: Sport and Leisure; Art and Literature, and Geography. In addition there's six galaxies, each with fifty planets and one object. Unlike the original there's no dice effect and players can choose to land on any of the fifty planets of their level. Questions are random and their type doesn't vary according to the planet's colour. Players take it in turn to test their skill and keep moving until they get a question wrong. Questions must be answered verbally in the presence of friends, and when the answer's displayed you're asked to honestly input if you were right or not. If you find an object and answer the question correctly you're automatically warped to the next galaxy. Once all six objects are found it's on to Genus to stand the final test.

For all the futuristic glitz this is actually quite a simple game and easy to pick up. As with Trivial Pursuit (91%, Issue 33) it's best played with a few friends since it's so easy - and tempting - to cheat. On the plus side, 15 blocks of multi-load questions offers a huge challenge and lastability. While I don't usually like trivia games I enjoyed this one and recommend it for the long holidays.

'The fun thing about the Trivial Pursuit series of games is the excellent way the questions are presented to you. A New Beginning has cute aliens that walk on screen to ask you things, and the six players all get their own little animated sprite. Similarly, the backgrounds are all detailed and generously coloured. The questions range from easy ones that even I could answer to real puzzlers that had Lloyd in a tizzy. So whatever your abilities, there are questions for you. And as well as the normal text questions you get graphics and sound questions. This is a great follow-up, even if it is a little expensive.'

'OK, you could say that this is just a remixed version of the previous Trivial Pursuit, but I think it's an improvement. In the previous version it was too easy to get questions on your favourite subject, but in the 'remix' you can't really do this, and unless you're Fred Housego you're bound to get some wrong. So gather family and friends round the log fire and instead of watching Terry And June, learn some interesting facts with this fascinating quiz game.'

Gather family and friends round the log fire and learn some interesting facts with this fascinating quiz game.