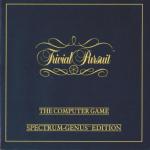 One of the biggest hits of last year (on all formats) was Trivial Pursuit, the computer version of the yuppie board game. After much head-scratching regarding a follow-up to this lucrative licence, those arch-yuppies, Domark, have come up with a strange sequel concept. Get your head ready for this - Trivial Pursuit in space. Weird, Yah?

Cut away all the trimmings, and what you have is still a multi player question and answer general knowledge quiz. The trimmings, then, are all that stands between TP - ANB and the hordes of lookalike trivia games. What's it all about then, lads?

Earth is dying, victim of the atmospheric greenhouse effect. You and your friends have the chance to escape by spaceship, but you will not be allowed to stay in the alien federation unless you prove your general knowledge skills. Tough cookies, these aliens.

There are six galaxies to explore before you reach the planet Genus 2. Each galaxy contains many planets, some of which contain objects which you must collect to complete your quest. The only way to find the objects is to land on each planet in turn, and answer a question from the alien inhabitants.

The graphics aren't much to look at; the planets have a number of different backgrounds, and different designs and colour of aliens. There are some neat effects as you materialise and dematerialise, but unremarkable sound effects; the odd blip and bleep, a bit of single-channel music to illustrate some of the questions, and so on.

Up to six players can compete, entering their names on the main menu screen, and taking it in turns to answer questions. If you get one wrong, you miss a go and suffer a time penalty. The players are represented by amusing icons, and TP, the gnome-like character from the original game, puts in an appearance too.

One problem is that the game doesn't actually require you to type in your answers; the computer just prints up the questions, you yell out your answer, and the computer asks you whether you were right or not. Obviously, there's nothing to stop you cheating.

From the spaceship screen, you can either land on a planet or access the main menu, where you can check how many objects you are carrying, quit the game, enter new players, switch sound effects on and off and load new sets of questions from the second cassette provided with the package.

In the final round you have to choose one of the Elders of Genus and answer his questions to make good your escape. If you choose the correct elder, the other players can examine your performance chart, and select the category of questions in which your performance is worst.

What it boils down to is, is it worth spending £15 or £20 on a trivia quiz? That's all it is; the graphics and effects don't add anything to the concept. Myself, I'd rather have a good nosh-up, buy a CD or two or even get a dozen paperbacks.