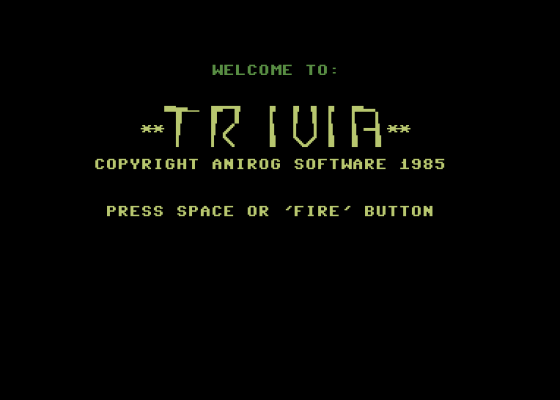 Trivial Pursuit is the more successful board game to have appeared in this decade, so its only natural that it should spawn a plethora of carbon copy games. Such being the minds of promoters, no possible spin off can to left unturned. Not surprisingly, therefore, computer versions of the quiz have begun to appear all over the place - in September we reviewed US Gold's Monster Trivia. Trivia UK is Anirog's addition to the market.

Most of these games tend to be similar to the original money spinner, but some details have to be altered to avoid copyright infringement. It is possible that Trivia UK is a licensed version of the game that started it all, but there is no confirmation of this on the package. This is a little unusual as the game itself is a pretty close copy of Trivial Pursuit.

For those of you unfamiliar with that game, the general idea is that you move a playing piece across a board which is divided into a variety of squares, each representing one of six areas of general knowledge. On landing on a square, you have to answer a question (picked randomly from a large box of cards) from the corresponding area of knowledge. These areas are History, Geography, Entertainment, Sports & Leisure, Art & Literature and Science & Nature. If you answer the question incorrectly, play moves to the next player. You get another move each time you do answer correctly. Sometimes you will land in a square which says 'Roll again,' and you do just that. At certain points on the board there are highlighted squares six of them, representing the different subjects. If you answer a question correctly on one of these squares, you get an appropriately coloured 'segment' that is slotted into your playing piece. When all six of the different segments have been collected, you have won. The simplicity of the rules is intended so that all the fun comes from the obscure questions and their often hilarious solutions. 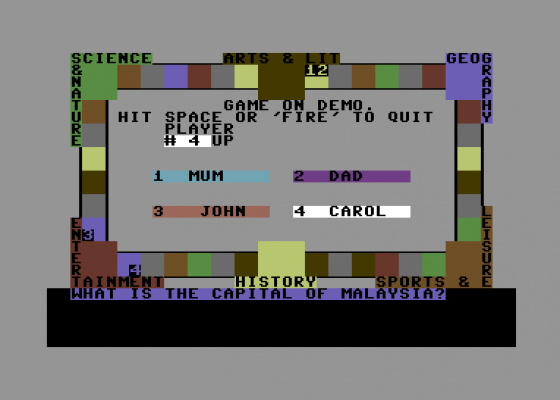 The computer game comes as a two-cassette file in four parts, so there should be an awful lot of questions in there. The game itself may be played with between two and four people but there is NO single player option. The board, unlike the original, is a rectangle without spokes. This takes up most of the screen display with a lower information window where questions and their solutions appear, dice rolls are made (for board movement) and other miscellaneous information may be accessed. When a turn is taken, a series of die throws are shown and then graphically the player is shown the squares clockwise or anti-clockwise to which the piece may move. Using the keyboard to select the chosen colour of the square, the piece than moves and, unless the square is grey (roll again), a relevant question appears in the window. You are supposed to guess aloud for the benefit of the other players, and press fire for the answer. If you were correct, pressing fire again allows you to have another go. Collecting 'segments' on the important squares is shown in the centre of the board.

The original board game is successful because it makes for a social affair and, the way I've played it, persons picking out the questions can also see the answers and then offer clues, which in themselves add to the flavour of the event. Trivia UK is one of those computer games that may appeal to people who like the original on which it's based, but it's also one of those games where the programmers have settled for a very basic graphic representation, without any of the frills which help you to enjoy it. The result is an ugly looking board which I found quite confusing. It also takes an age to load the game, and the jolly little tune doesn't exactly compensate for the wait. One advantage it has over Monster Trivia (apart from having English type questions instead of unanswerable American ones) is that you don't have to type in the answers and therefore you aren't at the mercy of an unintelligent interpreter.

The game itself is not outstanding in play, except for the fact that the questions tend to be very well chosen and as far as I can tell, have accurate answers. The idea that a whole family will happily sit around the computer to play a game which they could probably enjoy in far more comfort around a table, is not one which bears favourable consideration, but it might not be so bad for just two players. This game is not without its faults. In fact there are rather a lot of them, which is unfortunate because I think people tend to be less tolerant with games of this type than of arcade games or something of that nature. The game itself is both slow to load and play. There are so many questions, it is often necessary to wait for nearly a minute for a question to appear. The screen display is poor and it can be difficult at times to see, at a glance, where you are on the board. What's worse is that the colours chosen for text output are absolutely terrible and there were occasions when questions or options were totally unreadable unless seen on a monitor. The instruction leaflet is hardly precise, and this can lead to problems during a game. It is quite possible that you will lose an unfinished game because of the way that extra data blocks are loaded in. The real problem for games like Trivia UK is that they have to have something that the board version has missing if people are to bother with them, and I don't think this one has. You may feel that the price makes it a good option, but unless that factor is important to the majority of trivia freaks (which is doubtful given the success of their conventional counterparts), this game may well sink into oblivion.

Presentation 34%
Packaging isn't bad, but the game itself could look a lot better.

Graphics 9%
Cannot be as exciting as an arcade game but even so, they are very poorly handled.

Hookability 61%
Depends on whether you like the type of game, and how many players you have.

Lastability 67%
If you do bear with it, there are a lot of questions.

Value For Money 70%
It's still cheaper than the board game.

Overall 62%
May be alright for trivia fanatics who need their 'fix' of new questions.

You may feel that the price makes it a good option, but unless that factor is important to the majority of trivia freaks, this game may well sink into oblivion. 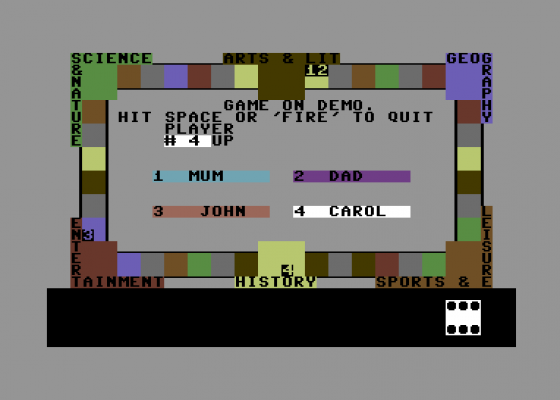