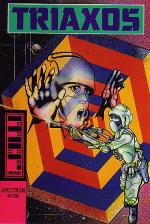 If you can imagine a game that's a cross between Mission Impossible and Lionel Richie's 'Dancing on the Ceiling' video, then you might just come up with Triaxos.

Triaxos is a space station cum high-security prison where the one man who can activate the galaxy's most powerful weapon is being held. Your mission, should you choose to accept it, is to penetrate Triaxos, locate the prisoner, and bring him out alive - before the mind-probe that's on its way arrives to turn his brain into jelly. You're playing against the clock, with a thirty minute time counter ticking away on screen. The mind-probe docks at the station ten minutes into the game so that means you've also got to locate the four parts of the special probe-laser so that you can destroy the probe too (I think its gonna be one of those days...)

Of course, no self-respecting prison would be complete without a collection of droids to guard the place and zap any intruders, so you'll need to keep your finger on the trigger and defend yourself from attack. The droids on the early levels are fairly slow and easy to avoid, but they do get deadlier the further into the station you get. Fortunately there's a conveniently placed Cloning Booth which can provide you with extra lives, as well as the odd grenade and supplies of high-explosives that are scattered around the place.

A three-dimensional display in one corner of the screen shows your position within the station, but what complicates things are the Face Lifts. No, I'm not talking about Liz Taylor - these Face Lifts are located in certain rooms and can change the direction of gravity so that the floor becomes a wall, walls become floors and ceilings and existing doorways become potentially deadly trapdoors.

The change in gravity does have its advantages, though. If you want to go down to the next floor and there's no way down you can just drop a grenade and blow a hole in the floor. Then you find a Lift, rotate gravity, and all of a sudden the room downstairs becomes the room next door.

Triaxos isn't exactly the world's fastest shoot 'em up, but then the 39 Steps label was set up by Ariolasoft for games with more of a strategy slant, so that's to be expected. It's more of a puzzle really, with a bit of zapping thrown in for variety, but while the gravity switching device is quite novel it's not enough to put Triaxos in the megagame league.

More 3D mapping-and-zapping with a couple of neat touches, but mainly it's business as usual.

Triaxos isn't exactly the world's fastest shoot-'em-up, but then the 39 Steps label was set up by Ariolasoft for games with more of a strategy slant, so that's to be expected.