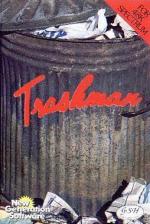 After all those games ending in 'man', you'd think that you were in for another dose of ghosts and power pills. But you'd be quite wrong with this latest offering from New Generation Software.

You play the part of a dustman, and you have to empty the bins by collecting them from the gardens, tipping the contents into the van and then returning the empty bin to its rightful owner.

All this is done against the clock; a timer ticks away slowly in the corner of the screen. Failing to empty the requisite number of bins in the time allotted will prompt a response from the boss to the effect that you're about to be fired unless your performance improves.

However, there are ways of obtaining perks, in the shape of extra time, by staying in the homeowners' good books. You do this by not walking with your muddy boots all over their newly mown lawns. In return, a friendly housewife will invite you in to show you her ZX81 and will reward you with (amongst other things!) some extra time points.

The main attraction of Malcolm Evans' previous games was always the stunning graphics; 3D Tunnel is still a talking point. And it's those excellent graphics which really make this game. The view of the street scrolls up the screen, and the player's angle is that of a bird's eye view.

The perspective is perfect, right down to the way the dustman stoops to pick up the heavy bin.

And there's a touch of Frogger in there as well, 'cos he has to collect bins from both sides of the road. To make life difficult, there are the cars which speed along in both directions. Animation is beautifully smooth and outclasses most of the pure Frogger games I've seen for this machine. The houses are superb too.

The only slight problem I found is that control is via the four cursor keys, which I don't like and find difficult to use. You can use a joystick though.

The fastest way to lose points in this game is to commit the deadly sin of walking on someone's grass. Doing this will, in all probability, deter the owners from offering you a much-needed tip. In fact, you'll probably wake the dog whose territory you've just invaded. Yes, just like real life, there're dogs too. Accompanied on-screen by the phrase 'scat or I'll bite your leg', the dog's appearance necessitates a hasty retreat for our intrepid binman.

Generally I enjoyed this game. It's not fast by any means but, if you'd rather have a challenge than spend all your time zapping things (no, you can't shoot the dog), then you'll love it. Trashman certainly lives up the high standards set by New Generation in the past. It runs on a 48K Spectrum and costs £5.95.

An enjoyable game. It's not fast by any means but, if you'd rather have a challenge than spend all your time zapping things, then you'll love it.