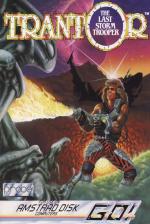 The People of Zybor have kept order in the solar system for thousands of years. Their control is slipping due to a new power in the world of Nebulithone. Trantor and a group of outlaw mercenaries set out to reconnoitre the planet. Trantor returns to the ship only to find it destroyed and the mercenaries dead. You are Trantor - the last storm trooper.

Before the game itself loads there are three loading screens to go through. The second shows Trantor's spaceship landing on the planet and Trantor stepping out of the ship and into the complex. The first and third loading screens are nice but merely waste time when you could be blasting away. There is also some digitised speech after the first loading screen and this adds a nice touch.

When you eventually start to play the game, you are presented with a large well-animated figure standing in a corridor. You're armed with a flame-thrower and can stride around the complex killing everything in sight.

This is all simple enough except that the complex is littered with alien life forms who all deplete your energy level. If you run out of energy then you expire and the game ends. Watch out for the large blue monster on the fourth level because, if it touches you, then you die instantly. Fortunately the blue monster and every other creature in the complex can be shot with a quick squeeze on the trigger of your flame-thrower.

Flame-throwers need fuel and this can be found in large cylinders on each level. There are also lockers on the levels and these contain one of several different objects. These include hamburgers to replenish your energy, fuel to replenish your flame-thrower and a pass key to allow access to the security terminal.

You can travel between the levels by standing on lifts and pressing down or up. There is one down lift and one up lift on all but the top and bottom levels of the complex.

Trantor is big and stomps around the complex in an impressive manner. The scrolling of the screen is smooth and fast. The title tune is good enough and the in-game effects are loud and effective.

Wandering around the complex cremating everything in sight is great fun. but after a while you have to settle down to completing the game and this may be when frustration sets in. Finding hamburgers is not easy and you often die within sight of a locker which could just contain food.

If you want a game that has got real zap-appeal then this could be the game for you.

This is a game with great initial appeal, but one that you may tire of quite quickly. The delightful animation, explosions, aliens and scrolling combined with fry-'em-up action are addictive. The drawback is that the puzzle element isn't that strong, so that the game can be solved within a few days play and won't hold much interest after that.

No problems at all.

Grab Factor 86%
P. Great fun zapping everything with your flame thrower.
N. Okay so there's not much thought needed.

Staying Power 74%
N. Beaming off the planet is a difficult task.
N. Once you've done it you may not bother again.

Overall 80%
P. Plenty of zap to keep you occupied.

If you want a game that has got real zap-appeal then this could be the game for you.