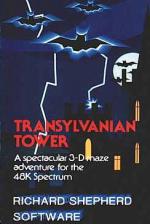 In the third of a series of theme adventures from Richard Shepherd, you are the intrepid adventurer trekking through the rooms and corridors of Transylvanian Tower.

The Tower has five floors, each floor consisting of a maze of 100 rooms. You start off in the dungeons at the very bottom of the tower, where you can practice navigating through the maze in safety, and call up a floor plan at any time to help you find your way out.

As you move up to the next level, though, your ordeal really begins. From now on, you risk being attacked by the evil vampire bats which flit around the rooms; The bats have their uses, though. Each carries a floor plan, which you can use once and once only if you manage to shoot down the bat. If you don't, you go without - from level 2 this is the only way to get hold of a plan.

If you manage to reach the final level, you battle directly with the Count. But I only just managed to reach the top level in the few hours I had to play the game, and then he killed me almost instantly.

The graphics and sound are nothing special, though there is imaginative use of colour, plus the odd beep and manic bat-squeak noises. New levels are very slow to materialise as you move up the tower, though this does at least provide a welcome break between levels.

Movement is controlled mainly by the cursor keys, and the laser gun is fired by the 0 key. Response time is, however, quite slow, and you have to hold down the keys for a second or two each time.

Response time is slow... You have to hold down the keys for a second or two each time.