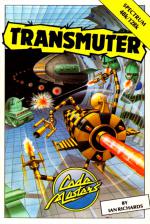 It's down the tube again and... hang on, haven't I been here before? Yes, of course I have, because this is none other than Scramble scrambled into a slightly new format and bunged out at a budget price.

Nothing wrong with re-doing this golden oldie though, because while the straight space shoot 'em ups have their attractions, there's nothing like flying through caves as well to get the adrenalin flowing.

The secret of Scramble is that you have limited space behind you for deceleration as the screen scrolls ever onward. In crowded areas you may find you have to zap everything, then position yourself for that narrow gap at the end of the tunnel if you're not going to prang your ship on a stalactite.

Transmuter is a bit of a mixed bag though. It begins brilliantly, with music that sounds just like Rob Hubbard's heavy pomp rock. But somehow the game doesn't run quite fast enough to get the real sense of danger that a dedicated scrambler demands. The graphics are okay-ish - imaginatively drawn, but with some irritating sprite flicker.

That said, Transmuter adds a novel feature to its inspiration. You can trade in points for extra features, Such as bombs, lasers, more speed and shields. These are selected with a keypress, as they flash below the playing area. But beware because moving, hitting fire and selecting simultaneously isn't just a handful - it sends you back to the start!

Still, Transmuter is a reasonably addictive budget blaster with a smidgin of strategy. At this price you shouldn't be disappointed.

Transmuter is a reasonably addictive budget blaster with a smidgin of strategy. At this price you shouldn't be disappointed.