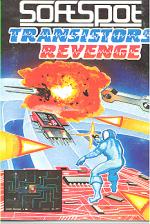 Revolution is brewing inside the BBC Micro. The printed circuit has become a battlefield as the CPU comes under attack.

The computer's components have become jealous of the CPU's power and authority and are moving down the tracks in an attempt to destroy it.

Your aim is to protect the 6502 from the rogue resistors and capacitors by firing pulses of electricity along the circuit wires.

The display shows the silicon chip in the centre of the screen with eight wires leading from it, criss-crossing over the screen.

Each wire has fifty components attacking the chip. If you become helplessly overwhelmed you can press the panic button which destroys all the components on the wires. This can't be used regularly because, once used, it takes twenty seconds before the "smart bomb" is re-armed.

Bonus points can be picked up by shooting one of four tools that appear around the edge of the printed circuit board, Transistor's Revenge, requires quick reflexes and a lot tactical thinking. Not since Planetoids have I been so impressed with a BBC game. I am sure this game will soon rank alongside Planetoid as a classic BBC program.

The game is very well written. After each game is finished, the program gives you the option to start a new game from where you left off. It also allows you to freeze a game while you nip into the kitchen and grab something to eat.