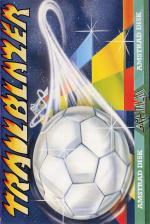 The subject of last month's cover story has now been converted to the Amstrad. The gameplay is similar to the Spectrum, the presentation is like the C64 version.

Trailblazer sends you hurtling along a gridded track in space, filled with holes and special squares to speed you up, slow you down, or bounce you high into the air. You control the path of a football-like object across this road in space - and it's all against the clock. The Commodore version could have two people racing each other in a head-to-head match.

The Spectrum version was one player at a time only, but in monochrome only. The Amstrad version is in full colour but only one person can play at a time. The importance of colour cannot be over-stressed as the function of each square is revealed by its colour.

The colours, animation, and general graphical quality of the Amstrad conversion of this game is extremely high, the rolling of the road is animated perfectly and seems to scroll round as though it was on a conveyor belt - all nicely shaded as well. A number of different tracks are stored in memory and these vary in composition, holes in different places, different booster squares - all requiring different methods to stay on the track.

Falling down a hole in the track or falling off the edge results in a time penalty. You also have a number of 'jumps' - these can get you out of certain problems - like a big hole in the way and no time to get round it. All you have to do is press fire and you sail up into the air (hopefully) over the obstacle. If you do fall down a hole then you are unceremoniously spat back up onto the track.

The only gripe I have concerns this 'spitting' bit. It is possible in a few of the tracks to land in one or two holes that result in your being spat into the air and straight into another hole, and another, and another, until your time just runs out. This bit makes the game hard rather than difficult.

On the whole though, this is a well thought out game that has all the little puzzles and annoying bits tuned so that they are just infuriating enough to make you want to play the game again. Incredibly simple but marvellously addictive.