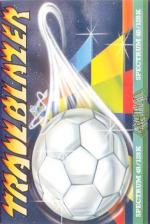 For anyone who didn't read the in-depth review of Trailblazer in last month's Gamer, the object of the game is simple. You have to guide a ball down a track in the shortest time possible. The track itself is composed of different types of square which may help or hinder you as you progress. If you complete the course within the time limit, you get a crack at the next track and so on.

Having seen this game originally on the C64 and been hooked by it, I was interested to see what sort of job Gremlin had made of converting it for the Spectrum, given some of the technical problems that the conversion presented. The result was somewhat disappointing for a variety of reasons.

In the original, different coloured squares denoted different functions thus a green square would speed the ball up, a blue one make it bounce, etc. Because it is not possible to get all the different colours scrolling at once on the Spectrum, Gremlin have opted instead to shade the squares with different types of cross hatching and I found it much harder to plan a route through the course using this method. The brain obviously reacts to colour faster than it does to patterns and split second decisions are vital in this game.

My main grumble about the game is that many of the courses have been made too difficult. Vast areas of nothing with only the occasional isolated square for you to land on mean that, in order to succeed, you must know the courses thoroughly and be capable of manoeuvring to exactly the right place at the right time. All too often, you fall down a hole, get launched again and land straight down another one. It is impossible to recover from some mistakes whereas, on the original, it was usually possible to take any number of routes rather than just the one.

Having said all that, Trailblazer is still a frustratingly addictive game, even if not quite as much as the original.