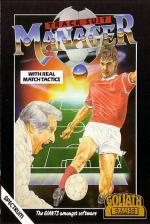 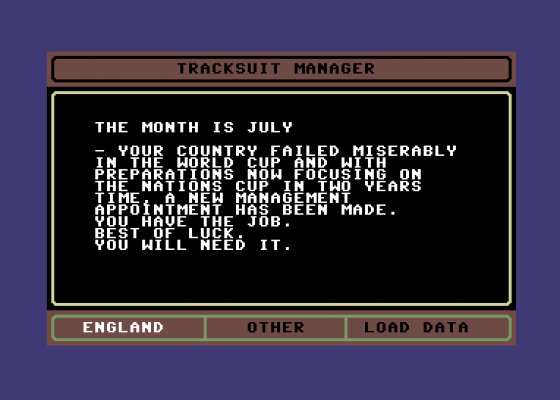 Goliath is a name you may not have heard a lot about, but it's a name that will be talked about quite a lot, considering the strength of this, the company's first entry into the software market. It is, and this is no exaggeration, the best ever football managerial game, ever, in the history of the world, no messing, straight up, honest. A claim you'd normally only hear from a PR company, but for me to write it, it must be something good.

You are given the task of managing the England squad, or any of 54 other countries, and gently nursemaiding them through first the European Cup (Nations Cup) and then the World Cup. As far as I can remember, and that's quite far despite my tender years, there has never been a true managerial game. There's always been a bit of administration and accountancy thrown in, which I have always found to put a dampener on the fun.

In Tracksuit Manager, you are only the manager. You know how they're going to play, and above all, win. 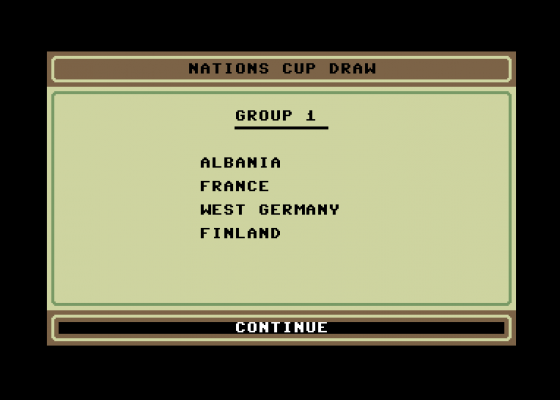 Glancing back over the four managerial duties, some of you might stop and think to yourselves that one and two have been done before, but what's this thing about 'how they're going to play'. As well as tackling an almost untapped field of the genre, namely international football, Goliath have gone for a far more involving and sophisticated approach to the match. With the use of a couple of menus, you can piece together a very complicated strategy very quickly.

Using the Team Tactics menu, you can set formation, playing style (attacking, defensive), length of passes, tackling, style, general defence system (sweeper, offside trap) plus a general guide to how you want the team to play the full match (slow build up, fast build up, fast counter attacks). All this generalisation not involving enough for you? Fine, just switch to the player tactics menu. With this you can tell a player exactly how to play, who to mark, where to play, whether to take free kicks, penalties, thrown-ins or corners and lots more.

The matches themselves are a piece of masterful programming. A small diagram of the pitch and a highlighted band provide all the graphical bits with the purpose only to show where the ball is.

The incredible thing about the matches is the commentary. Whilst playing, you are given a running update on all action on the pitch. Stuff like "Lacey gets the ball. Lacey runs upfield. Williams bring down Lacey" and so on for the length of the match, which, incidentally, is variable. Anything from sixteen seconds to 90 minutes, by using the joystick to give all the details about the match, such as the number of goal attempts, fouls, bookings, sending offs and more besides. The same thing happens after any other matches, which amazingly only take less than a second to play.

The main aim of the game alongside providing hours of fun, I am told, is accuracy. Over a thousand real players are contained within the program, and statistics are hel don all of them; such as passing accuracy, confidence, skill, heading acuuracy and tons more, along with their home clubs, caps and goals scored. Needless to say Maradonna is the best player I could find, with no less than five statistics at Brilliant level.

All of the usual stuff is also contained, such as group tables, fixture lists and the most impressive scout reports I've ever seen. The one thing that really adds pleasure to the game and can decide whether you feel good or not about your 1-0 win over Albania are the newspaper reports. After every match you play, you are given two newspaper headlines from the Daily Slag and the Sporting Knife. 'Cute' little messages like "Simmons googs up" and "Gene leads us to victory" along with many more can boost or drop your ego.

The whole game is joytstick-controlled and all options are selected from a little bar at the base of the screen. The presentation is very clean and professional, with the screen divided and re-divided into various windows and any and all useful information is always on-screen.