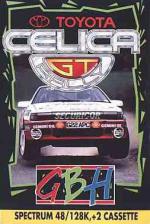 It was through battle weary eyes that I looked at Toyota Celica GT again. I've failed a few driving tests and crashed a few cars since I last saw it early in 1991, but the only thing that's changed on this game is it's label and price.

Options include manual or automatic gear-change, automatic centering for the steering wheel and even total reversal of all the controls for the really clever Dutch footwear admirers out there!

Unfortunately the game is let down badly by difficult control. It's difficult to stay on the road for even three seconds, never mind a whole race! I'm used to dodgy driving but I'm afraid, this was a bit too much, even with my flame proof undies on.

However nice presentation, detailed landscapes and the ability to create a co-driver, who can warn you of oncoming hazards and natter about his wife do give the game some appeal.

I asked a few questions about it as a full price game but you could definitely do worse than getting your hot hands on Toyota Celica GT as a budget release.

I hate driving, especially with Garth nattering in my lug holes and Big Al blocking the rearview mirror, but if you like car sims then give Toyota a whirl, you'll love the feel of the car but hate driving it.

You'll love the feel of the car but hate driving it.