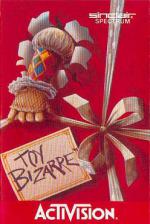 If you have always stayed away from balloons because they make a loud bang when they pop then Toy Bizarre from Activision will give you a chance to get your own back.

Leap around the levels of the toy factory using Merton, your puppet guide, to pop the balloons which are blown up from six huge valves. But beware! Break the balloons before they pop or they will deposit malign mechanical toys to snare you into losing one of your four lives.

An indicator at the top of the screen shows how many balloons you need to pop before moving to the next screen difficulty level. The initial levels are easy, and can be made easier if you have some understanding of hot air.

Not only do you have to contend with balloons but a manic robot, which goes by the name of Hefty Hilda, makes life hell by sliding along the platforms, intent on crushing you and turning on all the balloon valves.

A jump is in order if you want to avoid a battering by Activision's answer to Nora Batty.

All is not doom and gloom, howev- er, as the toys can be stunned if you jump on one of the two pistons on each level while the toys are on the other. Hilda can be sprung off the screen using the same technique but she can do the same to you.

Toy Bizarre is addictive and will attract those who find Jet Set Willy too difficult to master. It should also prove appealing to young children, not only because of the toy factory concept but also because there are few operation keys and the plot is simple.

The only danger is that they will be put off by the repetitive nature of the game.

Toy Bizarre is addictive and will attract those who find Jet Set Willy too difficult to master.