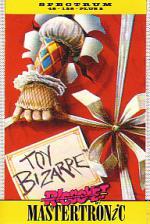 D'you know, you can now take a course in the history of the Speccy at college. (Ask your tutor about it.) One of the subjects of the course is covers through the ages and this, erm, covers such pieces as the anatomically astonishing Legend Of The Amazon Women and the endearingly dreadful Wally Week paintings.

Highlight of the lecture is undoubtedly Toy Bizarre. The best ever Speccy cover, this depicts a wrapped present, with a sinister doll's hand bursting out to undo the bow. Even Andy O was moved to say, "It's quite clever and subtle. I like it."

The scary theme carries carries on with the storyline. You're Merton the maintenance man, and you've been trapped in the toy factory at night. While a bunch of killer toys waddle about dangerously, you have to turn off various valves to stop more being made. There's an indestructible doll called Hefty Hilda clattering around as well. All in all, it's a bit of a nightmare. Spook city, Arizona, in fact.

What a terrible, terrible shame then that the game is a bland platform number. Forgiving the 1984 presentation (actually, the animated lopes of the main characters are really funny) the gameplay just doesn't stand up to close scrutiny... Look. (Sounds of someone closely scrutinising Toy Bizarre. Sounds of Toy Bizarre falling over.) There, told you. There's tonnes of racing around with no particular place to go and rather too much retracing your steps as Hilda opens all the valves you've just shut off. There's also the most amazing bug - when you get killed, your ghost pads off screen, then your new bod jogs back on. If there's a baddy there, you get plonked right on top of it and get killed again. Good grief.

I enjoyed Toy Bizarre for the first five minutes, but then Andy dropped his pen and my concentration was immediately shattered.

There's tonnes of racing around with no particular place to go and rather too much retracing your steps.