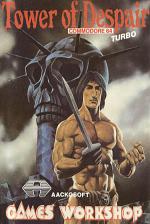 Malnor, Demonlord Of Darkness, once again resides within the Tower Of Despair. This time his threat to the realm of Aelandor is great - he now possesses the Ring Of Skulls, an Amulet of evil force with which he gathers malevolent powers to his side. You, the Warrior-Mage of Castle Argent and wielder of the Silver Gauntlet, have been summoned by the Council Of Wizards to destroy the Screaming Shadow. Only by finding the legendary Golden Gauntlet and utilising the power of both can Malnor be defeated.

Written using a customised version of The Quill, Tower Of Despair comes in two parts complete with a well-illustrated booklet of the game which includes maps, a background to the plot and history of Aelandor. The monochromatic pictures in the book require careful examination as they contain clues vital for success in the adventure.

You begin in Castle Argent, your first task being to gather all the supplies you may need to escape to the east with your life. The story subsequently takes you through magical woodlands to prisons of the mind, there to confront stone princesses, Dark Angels, Medusa and finally, Malnor.

Interaction is via verb/noun input - dated, but it works well enough to prevent frustration. The style of text is Middle-Earthesque and adds to the surreal atmosphere created by the thoughtful prose. Puzzles are difficult in places, requiring two or three commands in the correct order to reach the solution. However, you are taught this method of play by the relatively easy tasks set in the opening locations.

Tower Of Despair stands the test of time well and the dramatic artwork adorning the box will look very snazz on your shelves.

Tower Of Despair stands the test of time well and the dramatic artwork adorning the box will look very snazz on your shelves.