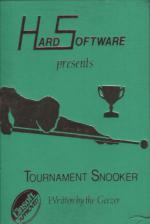 These tense battles fought between the likes of Davis, Taylor and Higgins can be recreated in Tournament Snooker. It is the first game from the aptly named Hard Software as it's a difficult game to play.

It's an extremely polished snooker simulation as it includes some additional features that make it one of the best snooker games that I have played.

Shots are selected by rotating a cue around the white ball until the desired direction is found. If you're unsure of the direction pressing "L" will move the cue as if you were lining up for the shot.

You can really impress the crowd by putting spin or stun on the cue ball but moving a pointer over a ball in the top left hand corner of the screen. Once you're ready to play, two keypresses hopefully sends the ball in the right direction.

Should you manage to pot a ball or get out of a snooker you can call up an action replay and bathe in your glory. This is a nice touch as it also shows beginners why their shots didn't quite go according to plan.

Finally, if you're fed up with missing even the easiest pots you can enter practise mode where you can set the balls in any position or you can leave the game to be continued later, in the meantime the game will play a demo game in which it will no doubt get a break of over 50.

Should you manage to pot a ball or get out of a snooker you can call up an action replay and bathe in your glory.
Logout