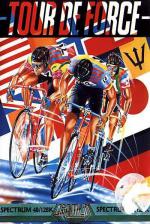 Tour De Force is a micro version of that world famous Grand Prix Cycling event from the land of garlic, frogs legs and striped T-shirts. Well it would be, except for the violence and the fact that each race takes place in far off countries such as Japan and Israel.

What was that about violence? Well we can't have a computer game without its fair share of blood and guts can we? In this cycling epic your biker can kick the living daylights out of the opposition and get points for it! You can even nudge fellow bikers into ramps or other deadly obstacles along the way.

That's not the aim of the game though. The idea is to beat 10 other players along a strip of booby trapped road and be the first to cross the winning line. This earns you a place in the next race. Anything less than first and you have to try again.

The playing area is jam packed with hazards. Bombs explode in your path, and people try to cross in front of you when you least expect it! There is even a young lady sprite that hitches up her skirt to divert your gaze for a second or two. It's tough out there.

All that pedalling can make you hot under the collar, so pick up the ice cream, wine or cans of Coke to stop your fella over-heating. Not too much wine though or the controls can get kinda tricky! Tour de Force is a multi-load game, but in the nicest possible way. There is none of that 'rewind tape to start' nonsense here. If a level is not completed the game allows you to try again and again (and again). It saves a lot of time and trouble.

The jerky scrolling distracts from the play quite a bit and I found my biker often became lost in a tangle of similar sprites, but that aside, Tour de Force is a polished and addictive little game. I liked it, but then again I like lots of things I shouldn't.

It will not keep ardent arcade fans occupied for long. I completed it in under two hours - and I'm lousy at this type of game. Try before ye buy.

Pedal powered arcade game that's a cross between Milk Race and Mean Streak - and better than both.

A pedal-powered arcade game that's a cross between Milk Race and Mean Streak. And better than both.