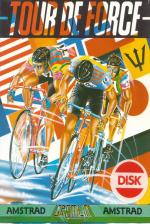 Get on your bike and pedal your way through five legs of a world wide race. You have eleven riders to race against and a time limit to beat. Can you win every leg and become the winner of the international grand prix cycling race?

The screen is made up of a horizontally scrolling landscape of the country that you're currently in. with a status panel around it. The status panel shows your position, time elapsed temperature and a map of the route. If your rider gets too hot then he collapses of heat exhaustion and your race is over. You also lose if you finish the race anywhere but in first place, run out of bikes or exceed the time limit.

To stop overheating you have to ride into bottles or glasses of liquid that appear along the course. Crashing your bike into one of the many different obstacles that you'll find on the route makes you lose one of your five lives.

If you manage to win a race then it's on to the next country for the next leg of the race What seems strange is that instead of having to go back to the starting course in Japan you're just sent to the start of the race that you've just failed to complete. On later courses your opponents resort to kicking you off your bike, but you can retaliate in the same manner Slow and jerky scrolling feature heavily and the graphics are very badly animated too. If you're wondering which bike is yours it's simple, it's the white bike in amongst the other eleven white bikes. Before each race a short snatch of the countries national anthem is played. There are no sound effects in the game itself.

This has loads of features that make for a bad game. Horrible graphics, virtually no sound and boring gameplay. Gremlin have let themselves down with this one, let's hope they can get back to games of the like of Deflektor.

Sonics 36%
P. Nice tunes at the start of the race.
N. No sound in the game itself.

Grab Factor 23%
P. Fun kicking your opponents off their bikes
N. Not being able to distinguish your bike is stupid.

Staying Power 18%
N. You'll complete it in under an hour,
N. Courses are much the same.

Overall 20%
P. A bad conversion of a poor original.

Horrible graphics, virtually no sound and boring gameplay. Gremlin have let themselves down with this one.