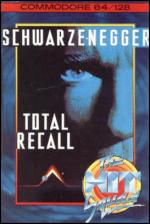 Total Recall | Use The Brakes, You Idiot!

"Surprise, you're not you, you're me!" - Arnie S is such an 'ard case, isn't he? Because the big guy's a national hero, Mark "No Problemo" Caswell gets to write the review and act 'ard.

Based on one of my all-time favourite Schwarzenegger movies. Total Recall tells the tale of a 'trip' to Mars that went horribly wrong. Doug Quaid, a mining engineer, is the chap with a big problem. After dreams of being a secret agent on Mars, Quaid takes a trip to Rekall (a company specialising in brain-implanted holidays). There he plans to pay for a Mars-based holiday, but finds instead that he's really a secret agent called Hauser. His mind was wiped when he learned too much about the plans of his boss, the villainous Cohaaggen.

The game starts with Quaid contacting a pal to gain clues to his real identity. Somewhere in the maze of platforms is a suitcase with vital clues and a video message from Hauser. So leap around and avoid or destroy the bad guys, led by the despicable Richter. Found in crates, the objects Quaid needs to exit Level One include oxygen bottles, special weapons and an icon that increases the hero's strength. Once Quaid escapes he leaps into a Johnny Cab and races along the highway in a vain attempt to shake off Richter and Co. The demolition derby moves horizontally across the screen, and is viewed from above.

Level Three is a similar "I like driving in my car" scene: this time Quaid's on Mars and has met up with Melina, a female resistance member. Richter and pals haven't given up yet, and so the chase is on as the player controls a cab driven by a mutant named Benny.

The final level's similar to the first (i.e. a platform-shooty thing): Quaid must first find Kuato (the resistance leader) and discover the whereabouts of an alien machine. This produces free oxygen - at the moment Cohaaggen's charging the population high prices for the air they breathe. It's up to Quaid to start the machine and end Cohaaggen's reign of terror.

Total Recall the film is one of my all-time faves. I've seen it 12 times to date (sad, isn't it? - Ed), and I must say the pixellised version is a corker. I wasn't working on Zzap when Stu, Phil and Rob first reviewed the game, so I didn't really know what to expect. There's nothing new in the design of the game, indeed two old faves are present: the platform blaster and the 'screech around' car chase. Background graphics are a tad on the blocky side but the character sprites are neatly drawn and well animated. The sound's also pretty impressive with a choice of pounding soundtrack or spot effects. So get ready for the ride of your life. 'Nuff said.

Total Recall | Use The Brakes, You Idiot!

Get ready for the ride of your life. There's nothing new in the design of the game, indeed two old faves are present: the platform blaster and the 'screech around' car chase.